The Castle of Fiumefreddo Bruzio watches over the houses with their sloping roofs, observing the ancient lanes intersecting each other, listening to the quick steps and quiet gate of its townspeople. Life is lively and serene in this little village, and its castle, ancient custodian of the borgo, was the first to be born here, watching the town grow around it over the ages.

Suspended between the sea and the sky, surrounded by the protection of high mountains, Fiumefreddo Bruzio seems to be born under a lucky star.

From high on the panoramic square, you can look out to sea until you cannot distinguish the line of the horizon. The immense blue of the sky merges indiscernibly into the endless blue of the sea, as a light breeze whispers, “Breathe! You are alive!”

The landscapes, the pure, clean air, the expanses of virgin wilderness, the exquisite borgo: everything in Fiumefreddo Bruzio is an ode to beauty and to life. 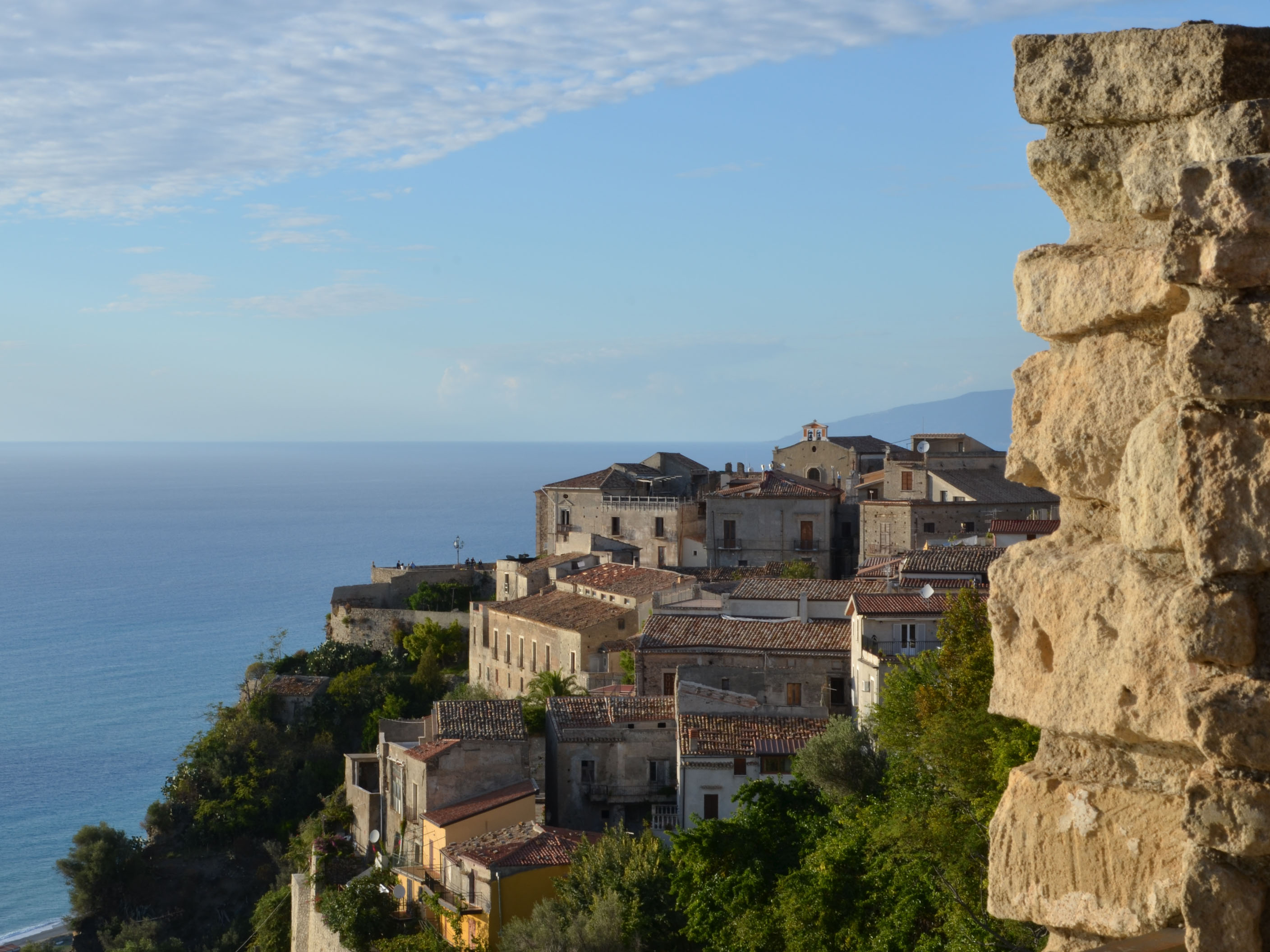 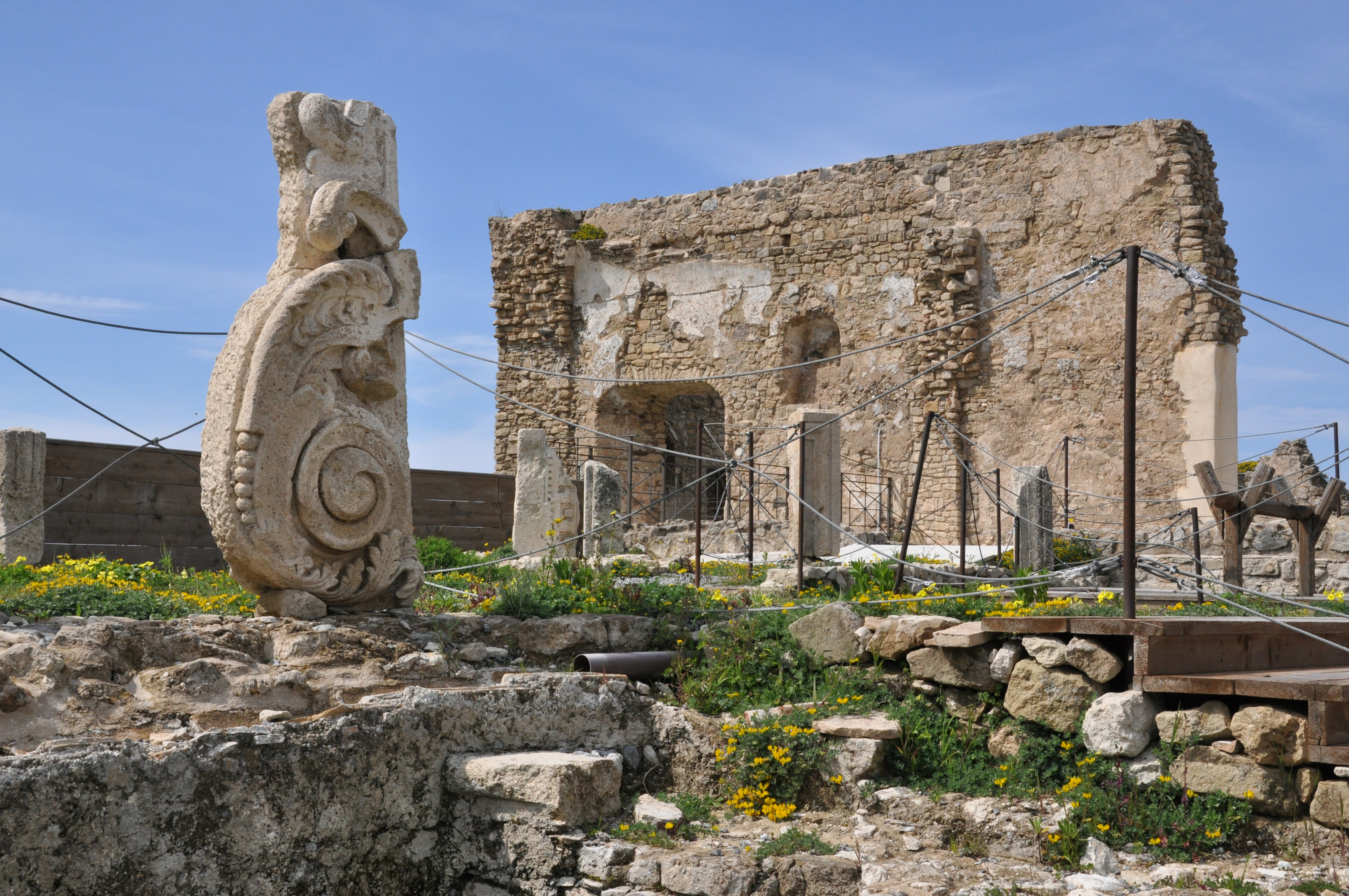 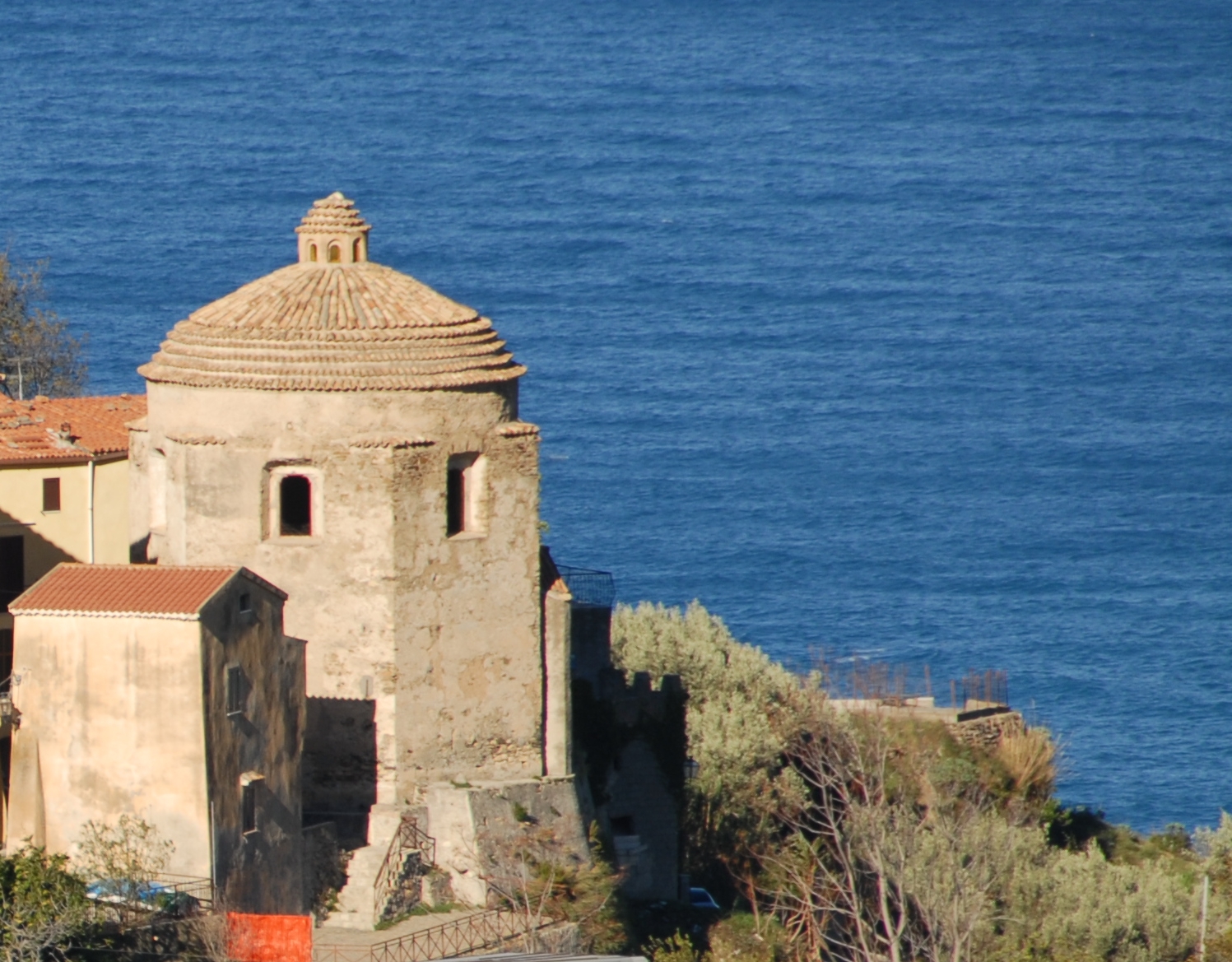 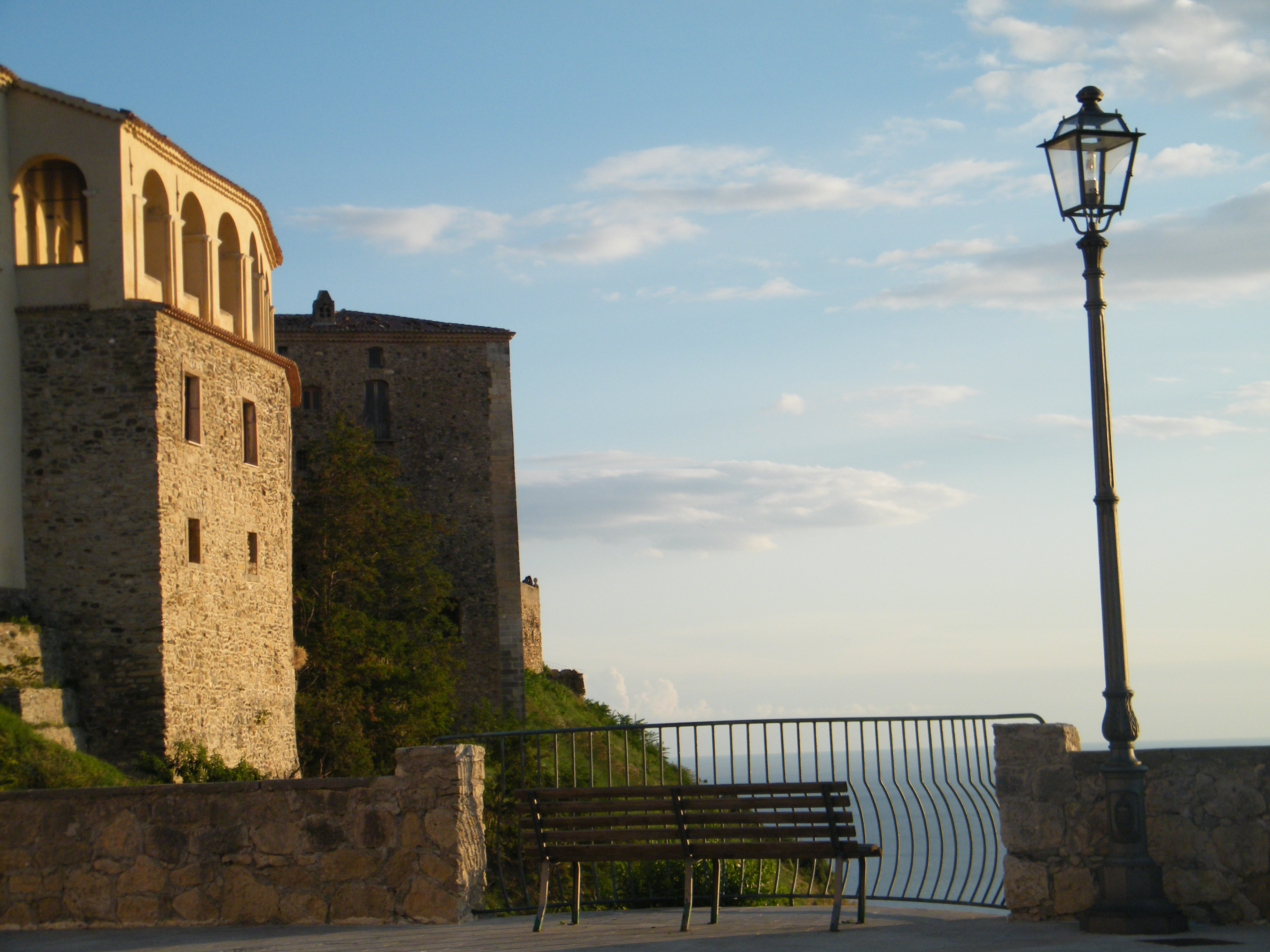 The first historical information regarding a settlement on the promontory where Fiumefreddo Bruzio is now located dates back to the height of the Middle Ages in 1000 A.D., but it was almost certainly inhabited in previous eras as well.

Flumen Frigidum,(Flumen’Fiume’-river, Frigidum‘freddo’-cold) was the first name of the town, because of a fresh water spring flowing just a few steps from the sea. The borgo was built on high ground to ensure defense against the waves of violent attacks from the Barbarians and Muslim Saracens, whose merciless invasions forced the entire South of Italy to its knees for centuries.

In 1054, the Normans arrived in Italy, and the Pope gave the lands of Puglia and Calabria to Roberto d’Altavilla, “il Guiscardo” (the Astute), who in turn, gave the fiefdom of Fiumefreddo to his brother Ruggero. This was the first of a long series of legacies and transfers of ownership between feudal lords. Every new ruler brought something of value and took something away, and the most important monuments in the borgo were constructed during this period.  Fiumefreddo’s symbol is its very first monument, the Castle, which was repeatedly remodeled over the centuries and almost destroyed in the 1800’s, first by Napoleon Bonaparte’s brother, and then by the French revolutionary, Joachim Murat.

The population of the town soon tired of the French attacks however, and they began to organize themselves secretly, to counter-attack the violations suffered.

In 1860, as the formation of the Unification of Italy was being finalized, the municipality of Fiumefreddo decided to add the appellative ‘Bruzio’ to its name, to distinguish it from other towns with the same name across Italy.

In 1975, the Sicilian painter Salvatore Fiume dedicated his skill and artistic vision to bringing new life to this Calabrian village, creating beautiful works of art in the castle and painting the cupola of the little church of San Rocco. Later, in the 1990’s he donated two bronze statues to the borgo, which were placed in Fiumefreddo Bruzio’s two main squares.

The Castle of della Valle

Simone da Mamistra, whose feudal dynasty ruled Fiumefreddo from the end of the year 1000 to the beginning of 1200, chose to build his castle on a rocky buttress, on the same spot as a defense tower from the Norman period.

Over the centuries, the castle was inhabited by several noble families, until 1535, when Charles V of Hapsburg entitled the fortress to Fernando de Alarcon, the Viceroy of Calabria and Marquis of the Valley. In 1536, the castle underwent extensive remodeling, with the aim of softening its appearance, adapting it to the fashion of the time. A city wall was also built around the entire borgo, with two towers, today known as the “Galette”.

The castle was inhabited until 1807, the year of Napoli’s uprising against the French. That year, some of the insurgents took refuge in the castle, causing it to be bombed and partially destroyed. What remains today are the ruins of a fortress that proudly displays the emblems of its majestic past but is not afraid to reveal the scars inflicted by enemy cannon fire.

In the 1970’s, the Sicilian painter Salvatore Fiume decorated the historical center of Fiumefreddo Bruzio, and his great masterpiece was the Hall of Desires in the castle. This particular salon had lost its roof and only later was it restored. The painter covered the walls with frescos representing his dream for Fiumefreddo. Unfortunately, the frescos were subjected to damage from the elements, and only recently has a sweeping restoration project been launched to restore them to their original splendor.

The Church of San Michele Arcangelo was built in the sixteenth century at the behest of the Marquis della Valle, Fernando Ruiz d’Alarcon.

In 1683, a violent earthquake damaged the building and during the subsequent restoration, the floor of the church was raised, the central nave was expanded, and the cupola and the bell tower were reinforced.

The interior has a single nave and is characterized by faux marble altars. The church is full of prestigious works of art, such as the series of paintings from the Neapolitan school between 1500 and 1600. Of all the magnificent works, two are particularly exceptional: “La Madonna del Carmelo” by Giuseppe Pascaletti, a local painter, and “The Miracle of San Nicola di Bari” by Francesco Solimeni.

The Church of San Rocco was built around the second half of the seventeenth century, over the ruins of an ancient coastal tower. It was constructed by people who had survived an epidemic of the Plague as an expression of gratitude to St. Rocco for his protection.

The church has hexagonal floor plan, and in the 1970’s, the cupola dome was reinforced and then embellished by an evolving progression of frescos by Salvatore Fiume. In the first fresco, counter clock-wise on the dome, San Rocco is covered in bandages, surrounded by scenes of pain, with Death standing behind him, while the final fresco in the cycle depicts Life triumphing over Death.

The scenes of the Plague in the frescos are inspired by the “Decameron” by Giovanni Boccaccio, and “The Promised Bride” by Alessandro Manzoni, contextualized by typical places and elements of the landscape and borgo of Fiumefreddo Bruzio.

Don Antonio Rotondo, the arch-priest in love with terracotta

Don Antonio Rotondo was born in the late 1800’s, almost two centuries ago, and still today his memory lives on.

He was the arch-priest of this small community in the hills, and the elders remember him as a man with a complex personality, endowed with a kind soul and great artistic talent. In fact, Don Antonio was not only a man of the cloth: he was, above all, a great artist who created elaborate Nativity Scenes with figures in terracotta. Unfortunately, his works were not appreciated by his Holiness the Pope, who decided to ex-communicate him. Don Antonio responded to this with an ironic judgment of his own: in his most famous Nativity Scene, he inserted a new section in Hell, populated by nuns and priests wrapped in the flames of their sins.

Some of his works are still on exhibition today in the Parliament’s “Quirinale” building and the “Museo dei Presepe di Roma” in Rome. His passion and his art have been passed down to us over the years thanks to Attilo Spina, his disciple in the early 1900’s, who handed down the artist’s secrets and techniques of working with clay to his son, Enzo.

Today, Enzo and his wife Anna carry on the family tradition with their prestigious artisan craft shop. Of all the exceptional pieces on display, the most beautiful is an unusual Nativity Scene set in the typical landscape of Fiumefreddo Bruzio, with the little borgo nestled in the stark, rocky mountains, surrounded by the ebullience of nature. The scenes are characteristic of a rural, pastoral village, transmitting a daily tranquility that suddenly slips into the bowels of the earth, with the characters finding themselves enveloped in the fiery red flames of demonic fire.

The incredible attention to particular details render the scenes clear and distinct, almost life-like, so much so that the artist has devised a mechanism that changes the setting from day to night.

Born in 1699 to a wealthy family, Giuseppe Pascaletti is Fiumefreddo Bruzio’s most well known painter.

He performed his apprenticeship in Naples at the painting studio/workshop of Francesco Solimena. Returning to Calabria some years later, he was able to receive commissions for his work thanks to the connections of his social rank and the support of the clergy.

The recurrence of religious themes and the repetition of similar subjects in his work did not allow him to enjoy particular fame or fortune. Very little is known about his art or his biographical details.

He died in 1757 and was buried in the Church of San Francesco de Paola, near the family chapel.

Do you known of any famous people related to this borgo? Contact us!

The culinary symbol of Fiumefreddo Bruzio is “la frittata di patate”, the potato omelette, which incredibly, is prepared with neither eggs nor cheese and therefore suitable for any type of diet.

Peel and wash the potatoes, then slice them into medium-thick slices. Once they are cut, arrange all the slices so they are not sticking together, add salt and a handful of oregano, a dash of pepper and mix. Finally, add the flour and mix again.

In a non-stick frying pan, add a tablespoon or two of oil and pour in the potato mixture, crushing the potatoes lightly with the ladle. Place a clove of garlic in a corner of the pan and cover with a lid, then cook for ten minutes on medium heat.

When the “omelette” is cooked, remove the lid and increase the flame to lightly brown the potatoes. Then, with the help of a plate, flip the mixture, taking care to collect the oil, and brown the other side.

Once it is ready, place your ‘frittata di patate’ on a serving plate, drying the excess oil. To be served hot. In Fiumefreddo, it is recommended to serve it with “soppressata”, a local artisanal salami, and a glass of local wine. 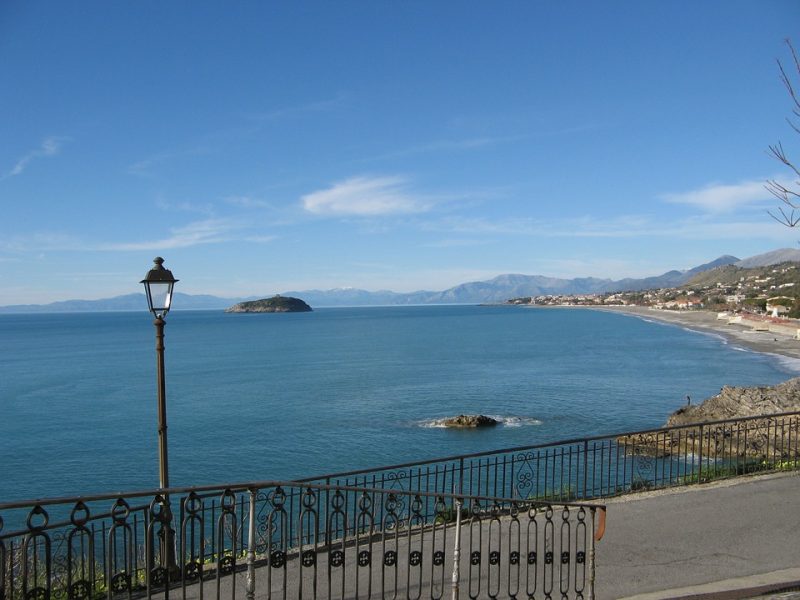