The Borgo of Montalbano Jonico

Montalbano Jonico is a delicate petal of a city set over deep gullies, looking out over the Ionian Sea which gleams in the distance, framed by pine woods and aromatic Mediterranean shrubs. Ancient Norman walls encircle Montalbano, protecting the lively character of a village where culture intertwines with a millennial history, preserving all its traditions and the intense flavors of its cuisine. Today, these ancient defensive walls hold a maze of narrow stone streets and lanes full of fifteenth century churches and noble palaces, the elegant homes of the men and women who once made Italy’s history.

The city is surrounded by the “Riserva dei Calanchi”, a natural reserve that follows ancient paths, mule tracks, and livestock migration routes leading to the sea and beyond, climbing to reach the majestic mountains of the “Messiccio del Pollino”. They wind through the valley crossed by the Agri and Cavone rivers, pass the Archeoparco, climbing the heights to reach the Belvedere and then make their way down to the “Terra Vecchia” district, to the unique splendor of Emperor Federico II’s “Domus Federiciana”.

In this village suspended between the sky, the land and the sea, happiness is yours for the asking. 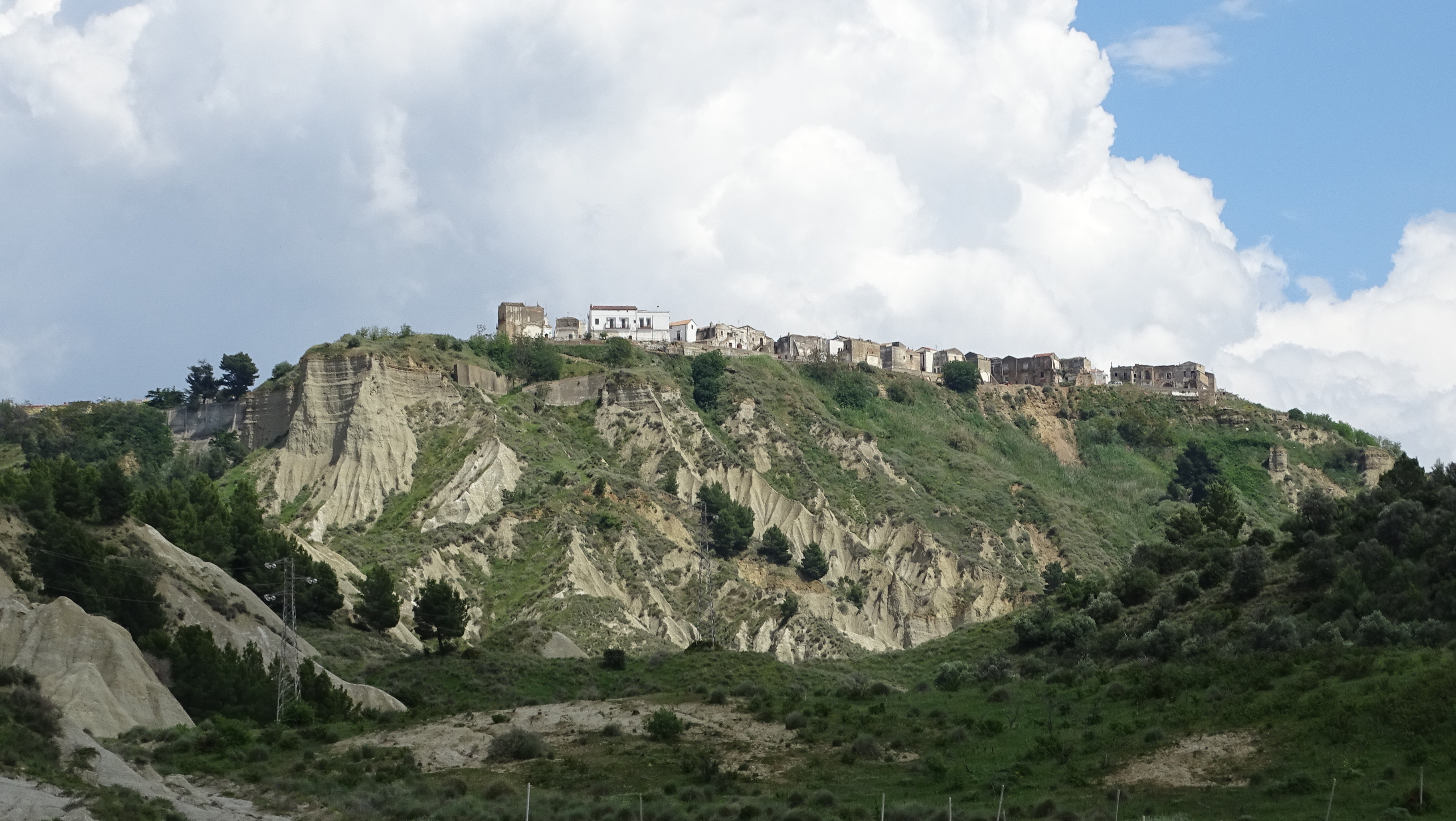 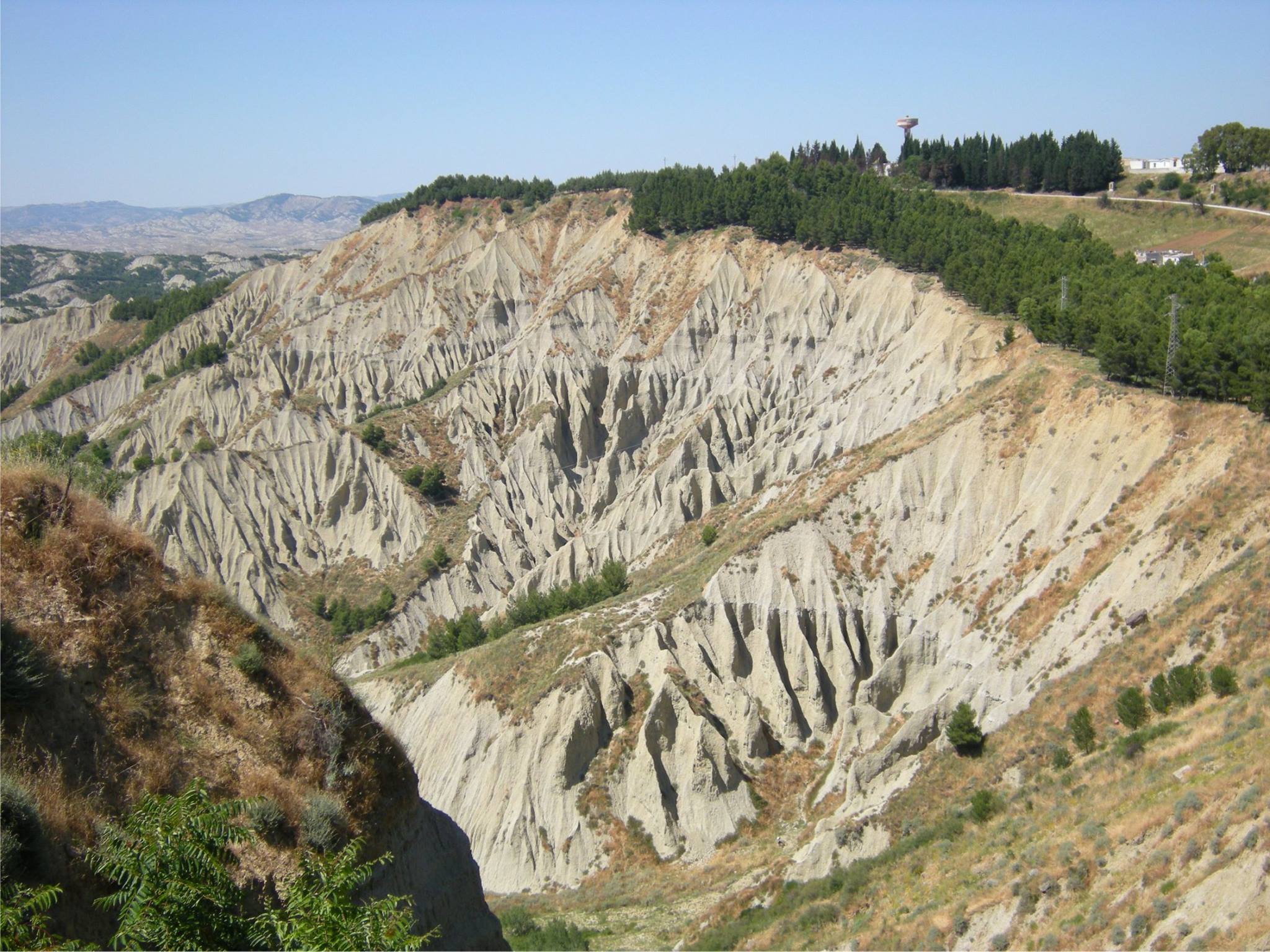 Historical findings in Montalbano Jonico provide evidence of human settlements dating back to the Iron Age. Officially, however, the founding of the village dates back to approximately 280 B.C., when the Greek hero, Pyrrhus, landed on Italian shores and defeated the Romans at Heraclea.

The history of Montalbano Jonico is integrally linked to the “Magna Grecia” and Greek culture. During the ascent of the Romans to power, this village benefited from a privileged position, as it was situated directly on the thoroughfare of grazing migration paths, also used as trade routes.

With fall of the Roman Empire, Montalbano Jonico was subjected to the same fate as the rest of Southern Italy, to be dominated by a succession of  Byzantine, Norman, French, and Spanish rulers.

During the Middle Ages, with the advent of feudalism, Montalbano was governed by diverse noble families.

In 1555, this small borgo was attacked and sacked by the Turks, who refused to be stopped by the Aragon fortifications and the deep gullies naturally protecting the area. After passing through this dark moment in its history, Montalbano set to work to reconstruct and strengthen its defensive walls.

In 1799, the population of Montalbano sided openly against the Spanish Bourbon rulers, initiating a powerful and influential movement against the sovereigns, led by Francesco Lomonaco, to whom the famous Italian writer Alessandro Manzoni dedicated a sonnet: “To Francesco Lomonaco” (1802).

With the Unification of Italy, the suffix ‘Jonico’ was added to the name Montalbano, to distinguish it from other cities with the same name found around Italy.

In the latter half of the twentieth century, the territory of Montalbano Jonico underwent drastic downsizing, losing its two annexes, Policoro and Scanzoni Jonico, which became autonomous municipalities.

Today, it is a small but active city, benefitting from the fertile land that has allowed remarkable developments in the field of agriculture. For some years now, Montalbano Jonico has also begun to enjoy flourishing tourism , thanks to the stupendous landscape surrounding the town and the mild, pleasant climate typical of hill villages.

The deep gullies of the “Calanchi” descend to the valley below, reaching the banks of the river Agri and embracing the fragrant pine forests and Mediterranean foliage. The ravines create evocative and poetic landscapes that are unique in all the world.

“Calanchi” are a phenomena of erosion of  clay-rich soil, created by the painstaking work of the wind and rain. The Reserve of the Calanchi  surrounding Montalbano Jonico is the largest in the entire region, the result of a natural process which took more than a millennium to create the forms we see today. In 2011, to protect the inestimable value of the natural and cultural heritage of this unique territory, the Basilicata region established the “Riserva Regionale dei Calanchi di Montalbano Jonico.”

Archaeological studies carried out in the area have allowed us to analyze the geomorphological trend of the territory, identifying traces of historical evidence dating back to the lower to middle Pleistocene era. The Calanchi, despite giving the impression of an arid and dry environment, offer the ideal habitat for an ecosystem where a wide variety of rare species of flora and fauna live in perfect harmony. In particular, this rarified natural oasis is an important resting and reproduction site for various species of birds.

Unexpected wonders are hidden in the reserve, such as the geological site of “Tempa Petrolla”, a rocky spire that rises in solitude, surrounded by an expanse of fine clay.

The Calanchi Reserve of Montalbano Jonico is the ideal place for hikers in search of unique environments to explore. Along the sides of the gullies and ravines you can follow the mule trails, the “appiett” in local dialect, which intersect with the ancient livestock migration routes and connect the city center to the “Gardens of Montalbano” near the banks of the Agri river. The advent of technology and motor vehicles led the mule tracks to be abandoned as daily routes of travel, but they continue to offer spectacular panoramas. Along these ancient paths you can discover the unique treasures of Basilicata: the  fascinating Calanchi, the marvelous coast of the Ionian Sea, and the majestic Pollino mountains.

The ancient history of  Montalbano Jonico is closely linked with the “Magna Grecia” and a group of Greek colonies that settled in the area, specifically in the “Contrada Andriace”, which today is divided between Montalbano e Scanzano Jonico.

The proximity to the water source of the Cavone river and the fertile clay-rich soil created a favorable environment for the development of a well-structured urban center. Unfortunately, the necessities of daily life led the settlers to significantly modify their surrounding environment, implementing deforestation and the canalization of river water. The numerous farms which still remain throughout the territory give us an indication of how important agriculture was at that time.

This archeological park was officially founded in 2007, and included a territory of some nine acres which was enlarged over time. The main objective of the project was to allow people to experience close contact with archeology through historical reconstructions, the use of prehistoric tools and instruments, and a “learning by doing” approach.

In 2013, despite inherent difficulties and lack of funds, the largest open-air experimental archeological facility was finally inaugurated.

The archeo-park is divided into several sections, the most characteristic being the reconstruction of the lives of populations living thousands of years ago. As you walk through the park, you come upon a Neolithic village set in a period of time between the fifth and the third millennium B.C..

The centerpiece of the village are two thatched huts with all of the elements necessary for the main activities of prehistoric man: a well, stalls for livestock, pre-historic farming tools and even a watch tower and a moat surrounding the area, which served to protect the village.

As we know, the history of Montalbano Jonico is linked to the arrival of the Greek hero Pyrrhus in Italy. In 280 B.C., the year this borgo was founded, Pyrrhus defeated the Roman army in Heraclea. To honor this historical turning point ,the park has taken a leap forward in time from the Neolithic era and recreated the Castra Aestiva, the encampment of the Fourth Legion of the Roman Republic, led by General Publio Valerius Levinio who fought his losing battle against Pyrrhus.

A little further on, we find an “Ikria”, a wooden construction that was used for viewing shows and public performances.

To its great merit, the Archeoclub d’Italia Association has succeeded in creating a unique world of discovery to inspire visitors of all ages to fall in love with archeology and ancient history.

Nicola Romeo and his “Alfa”.

The story of Nicola Romeo is a modern fable, a mix of  Realism and the classic tale of “farm boy makes good”, with a dash of Charles Dickens. Nicola Romeo was born in 1876 in a village near Naples, to parents from Montalbano Jonico. His family was of humble and poor origins, but this did not hinder young Nicola’s thirst for knowledge, and he walked all the way to Naples every day to study at the Technical Institute. He then studied engineering at university in Naples, receiving his degree at twenty three. Soon after, he departed for Belgium to further his studies, after which, he continued his research in France and then Germany, two countries that were at the forefront of the  of railway and electrical sectors.

Finally equipped for his profession, Nicola Romeo returned to his homeland and began to look for work in keeping with his prodigious skills, but the only job he found was as stationmaster at the Tivoli train station, which he refused. While he stubbornly continued looking for work and attending job interviews, on a train one day he met an executive from Robert Blackwell&Co. The British company was planning to open a branch in Italy, and Nicola Romeo represented what modern marketing defines as “the right man and the right time”. For many years, Nicola Romeo was the head of the Italian branch of the company, a role that enabled him to acquire a wealth of skills and experience sufficient for him to set up a business of his own.

In 1906, with the support of some partners, he opened his first company: “Engineer Nicola Romeo & Co.” which dealt with trade in rotary materials for a British company and compressed air equipment for an American firm.

In 1911, he opened his second company, specialized in the production of machinery for the extraction of fossil materials.

Back in 1909, a group of investors had acquired an Italian automobile company and named it “Anonima Lombarda Fabbrica Automobili”, or A.L.F.A.  In 1918, that company was bought by our enterprising engineer/entrepreneur and it became: “Alfa Romeo”.

The company was not immediately successful however, in fact, until the 1950’s it faced one financial difficulty after another. It was only with the economic boom in the second half of the twentieth century that the company began to stabilize with the manufacture of automobiles. Unfortunately, new problems were at the door, leading Alfa Romeo to be acquired by the Agnelli family and the Fiat group in 1986.

In the 1990’s, at long last, Alfa Romeo achieved its moment of glory and the company finally took off, reaching the highest levels of international prestige and fame.

Do you known of any famous people related to this borgo? Contact us!

The cuisine of Basilicata is triumph of  authentic flavors and genuine ingredients that come straight from the rich earth of this land, brought to you by the callused hands of  farmers, and the musical chatter of mothers and daughters over sizzling frying pans.

The most important traditional dish in Montalbano Jonico is “ la Cialledda”, which is also common in the other towns around Matera.

First of all, pour your oil into the pan and heat it. Once hot, add the fresh onion, cut into julienne slices, and fry until golden brown. Once this procedure is completed, add the tomatoes. Once they are cooked, add the water and salt and bring to a boil. At this point, the eggs are added, one for each person who will be eating. Once the eggs are cooked, the soup is ready to be ladled into your soup dishes over the dried bread which has been placed there before serving. 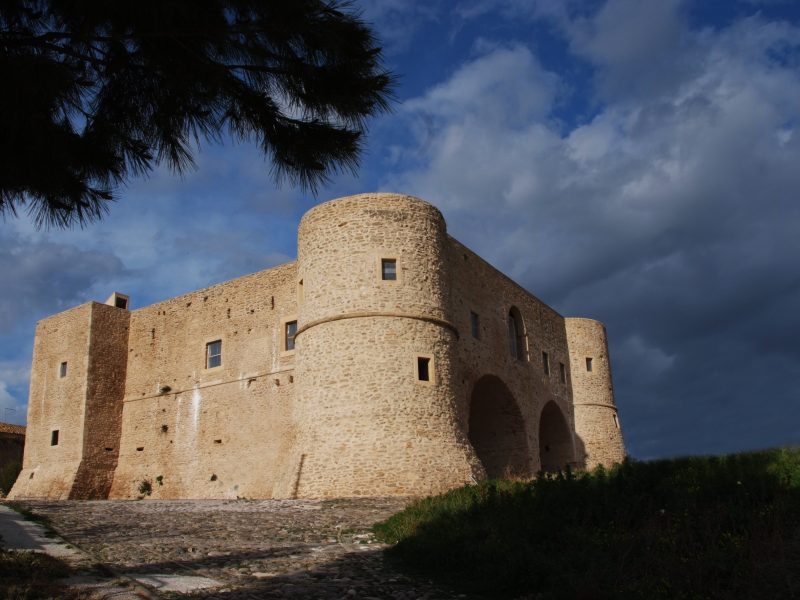 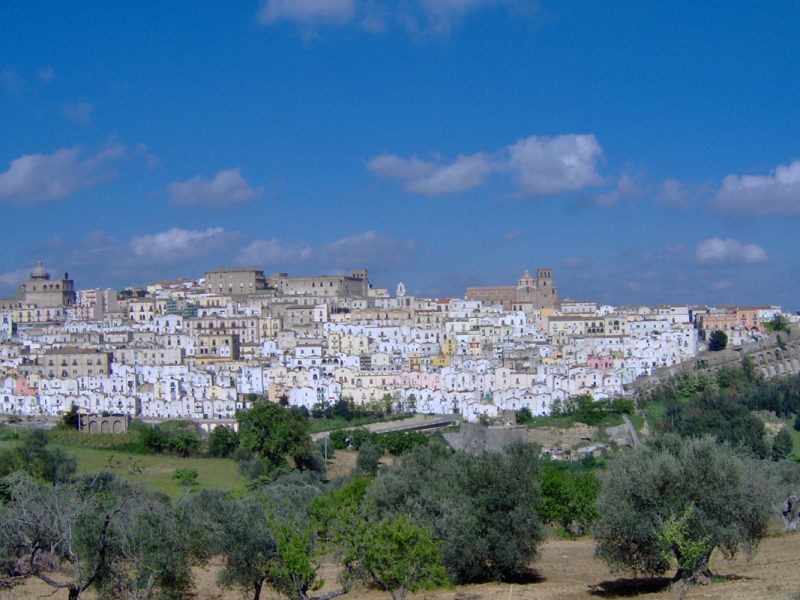 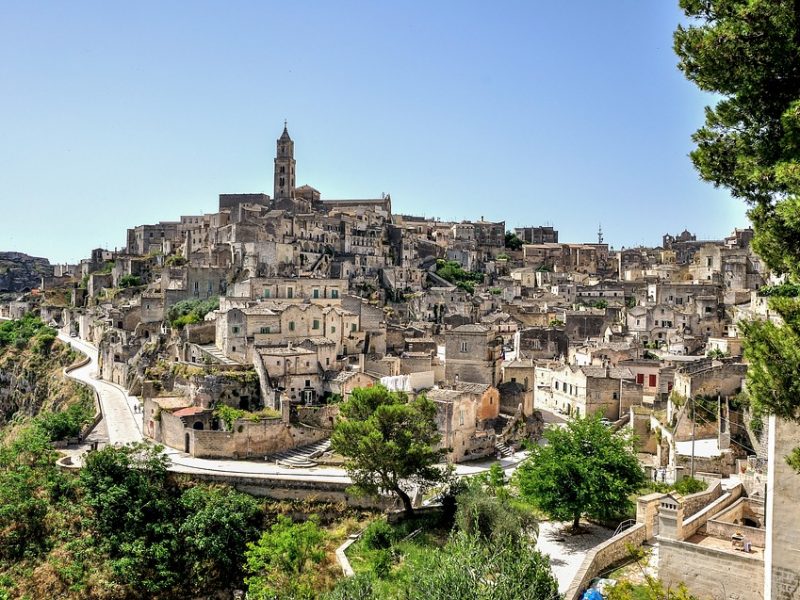