The Borgo of Monopoli

Monopoli is the city you don’t expect, a jewel perched over the sea, shining with bright colors as lively and joyous as the people who live there. The crystal clear turquoise sea is one of the most beautiful in Puglia, and whoever goes to Monopoli can easily enjoy a magnificent swim in its characteristic inlets, far from the frenetic rush of mass tourism.

You can lose yourself and find yourself again, wandering the poetic lanes of this ancient village of white-washed houses set between the sea and the brilliant green fields of the Valle’d’Itria.

Monopoli is the hospitality of its people, whose strong embrace leaves its mark, extraverted and vivacious as the flowered balconies and the little venues of the historical center that animate the balmy summer evenings full of unforgettable magic. Ninety-nine ancient streets to explore and discover, unforgettable poetic angles and breathtaking views await you in this ancient seaside village so full of life and dreams that you will never want to depart. 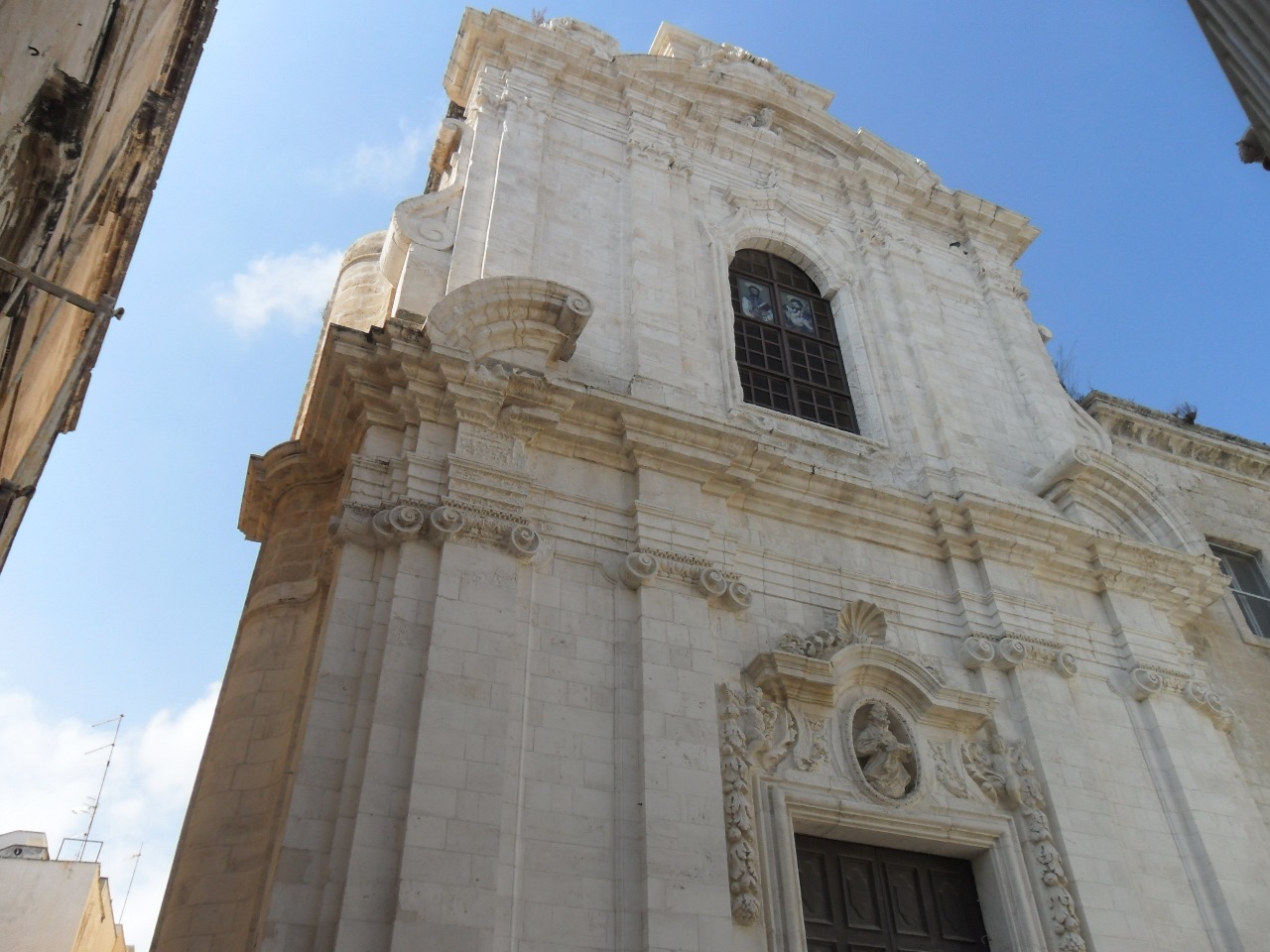 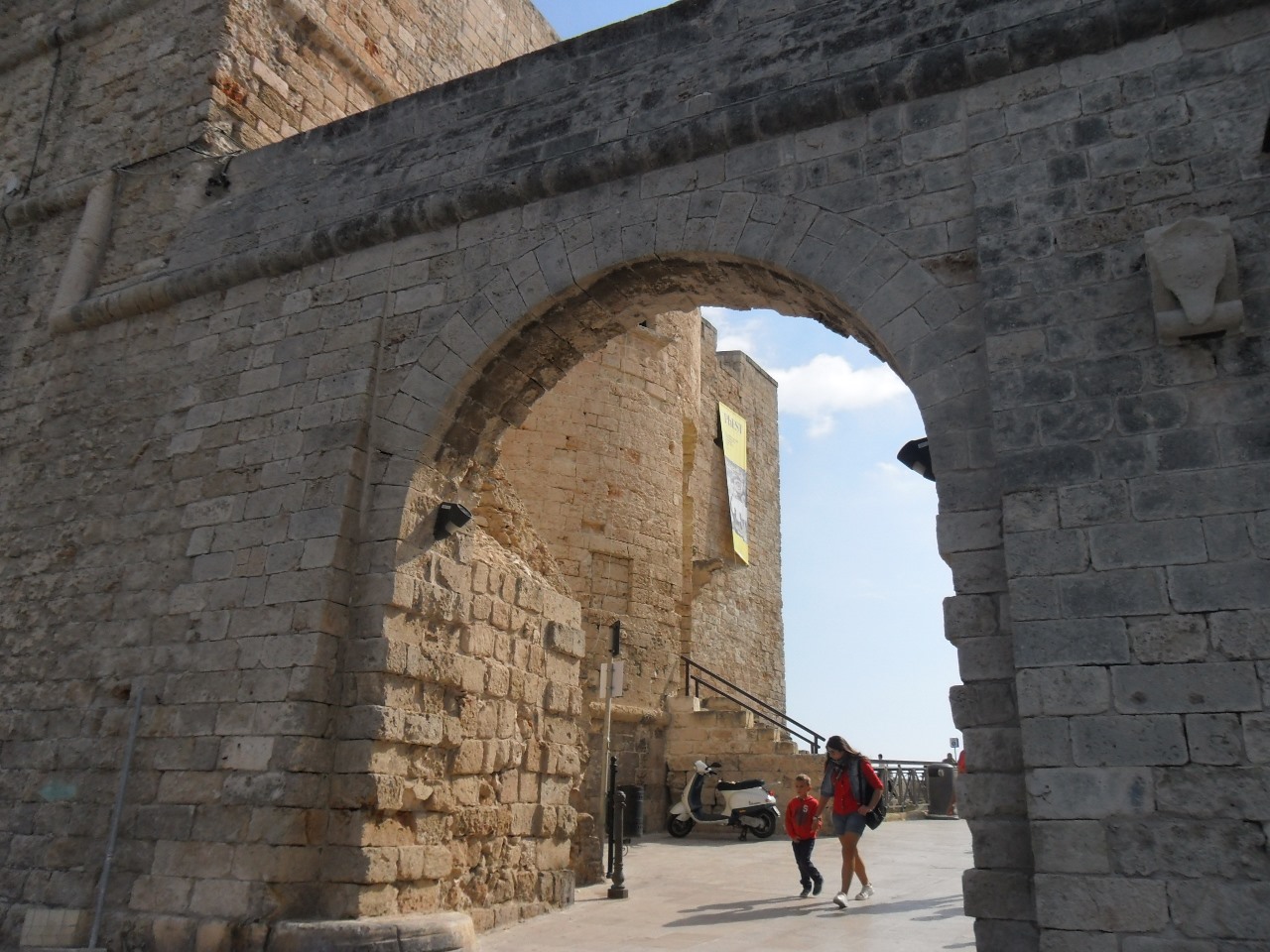 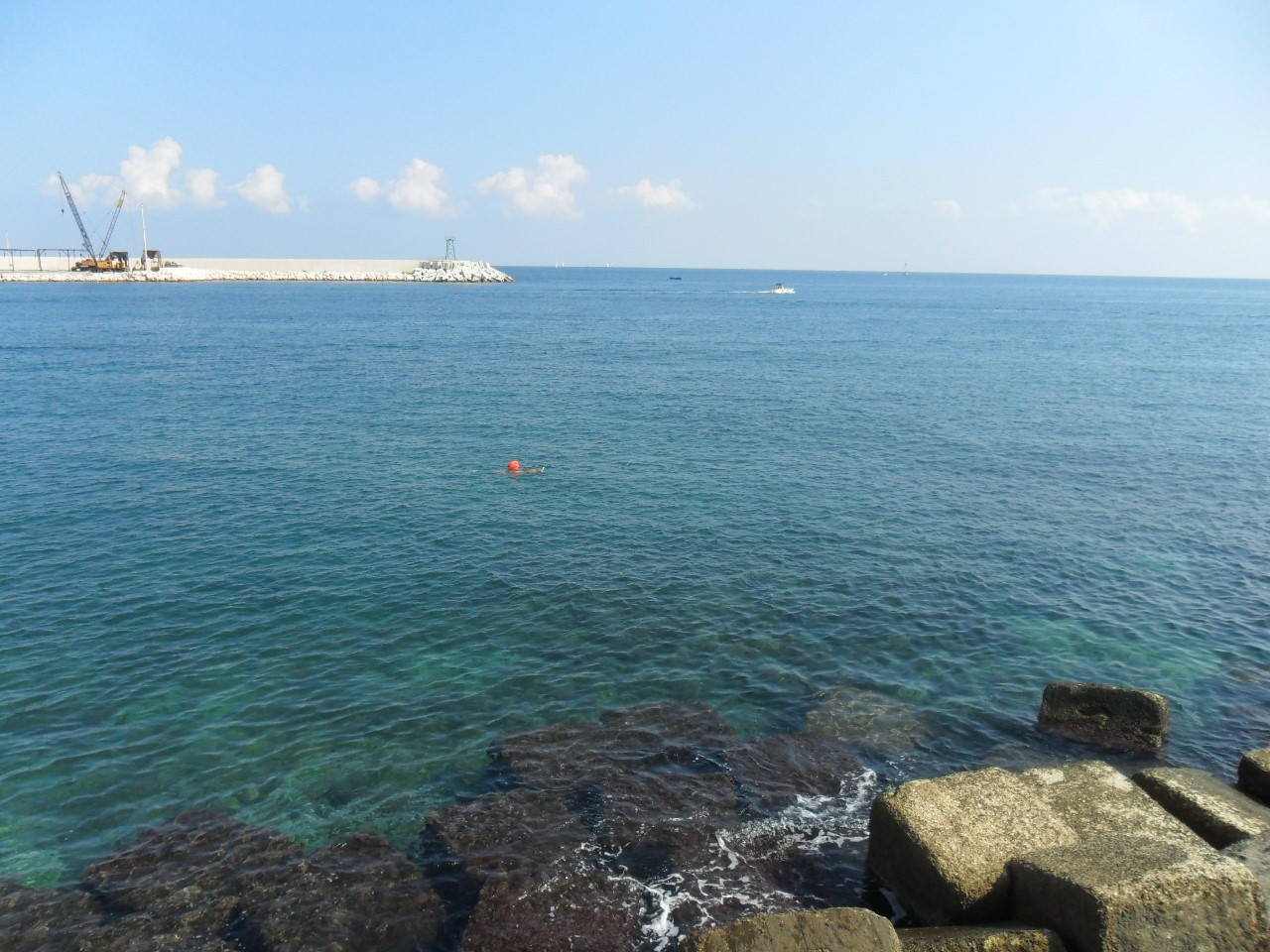 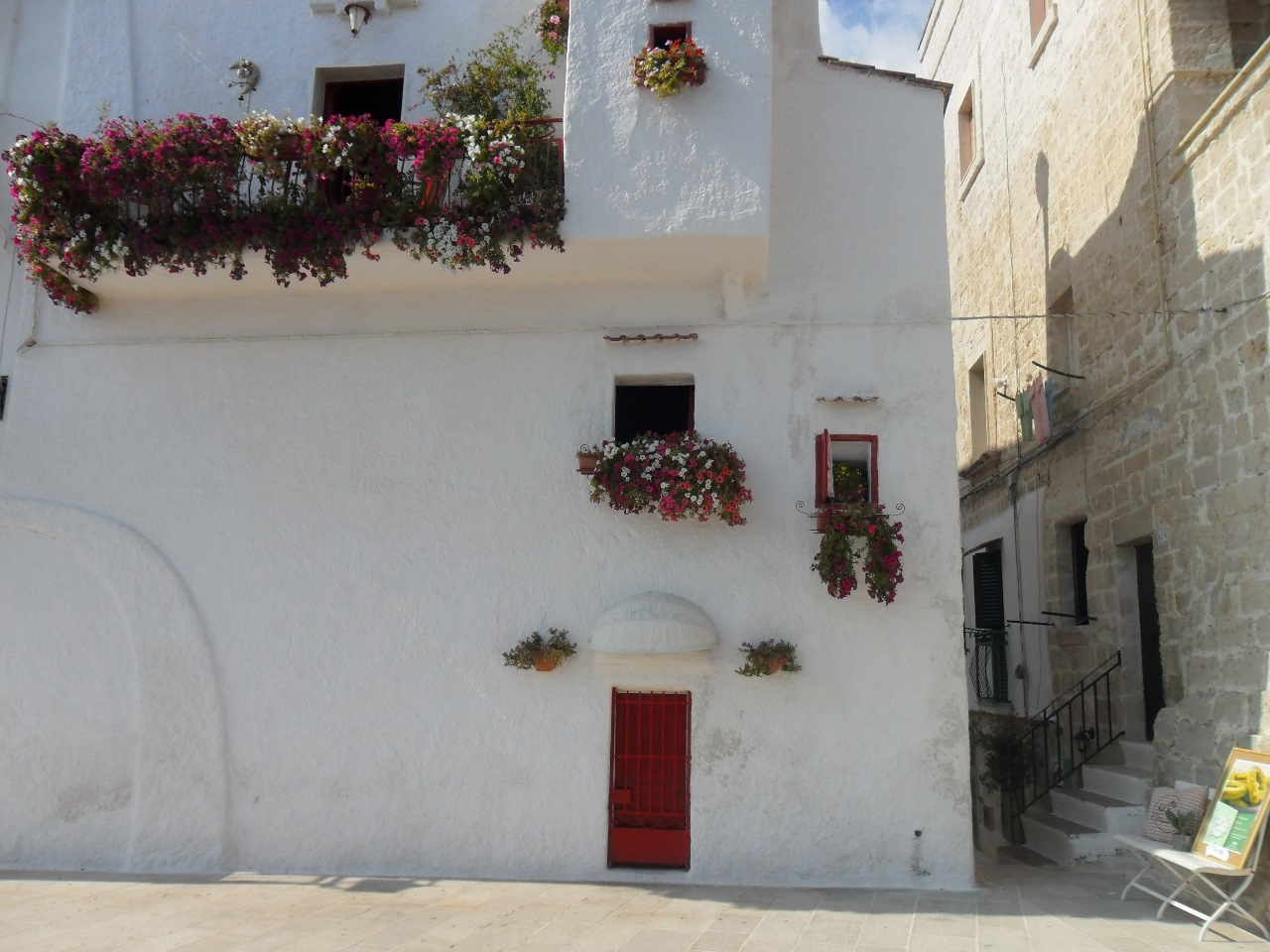 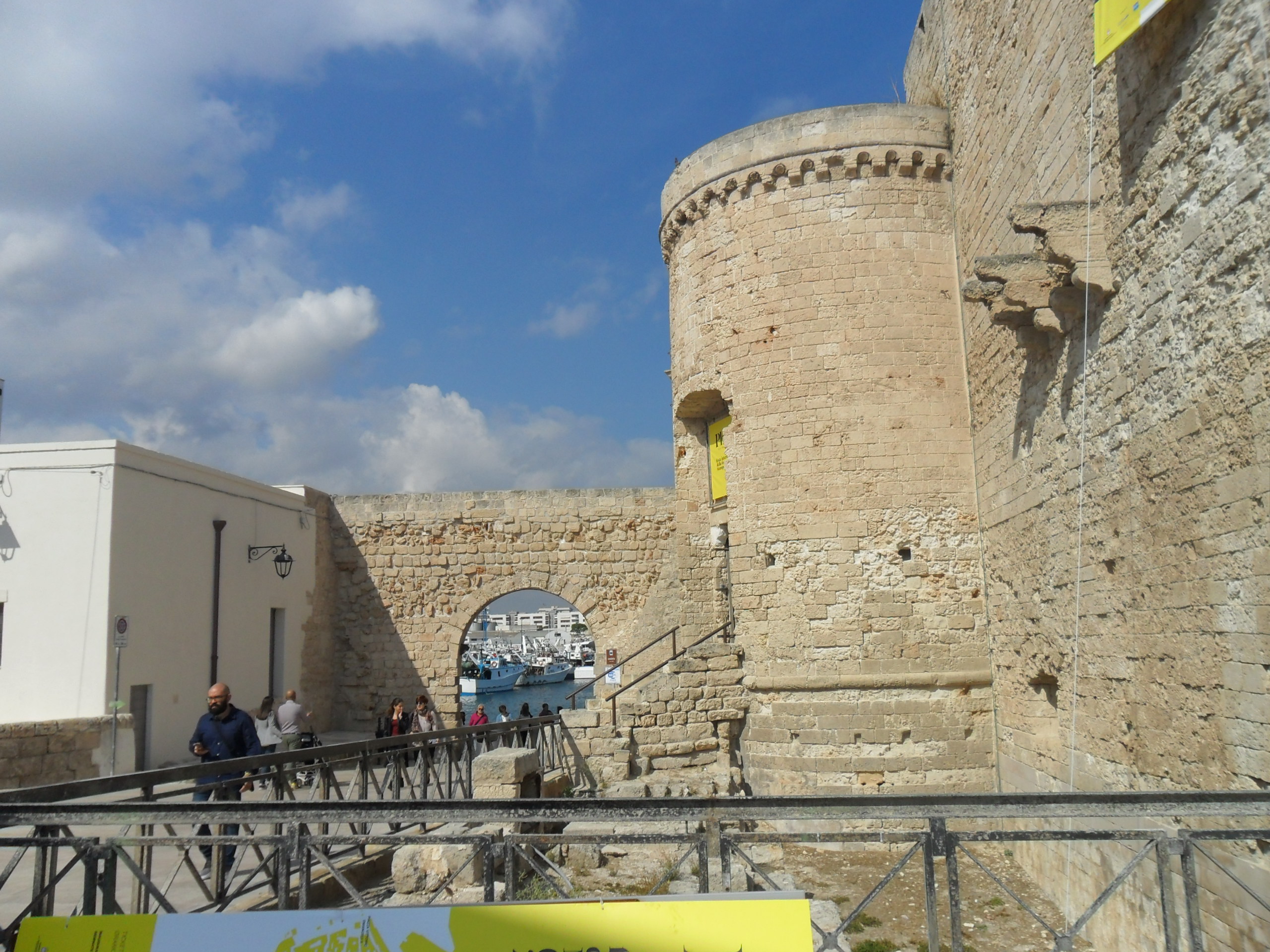 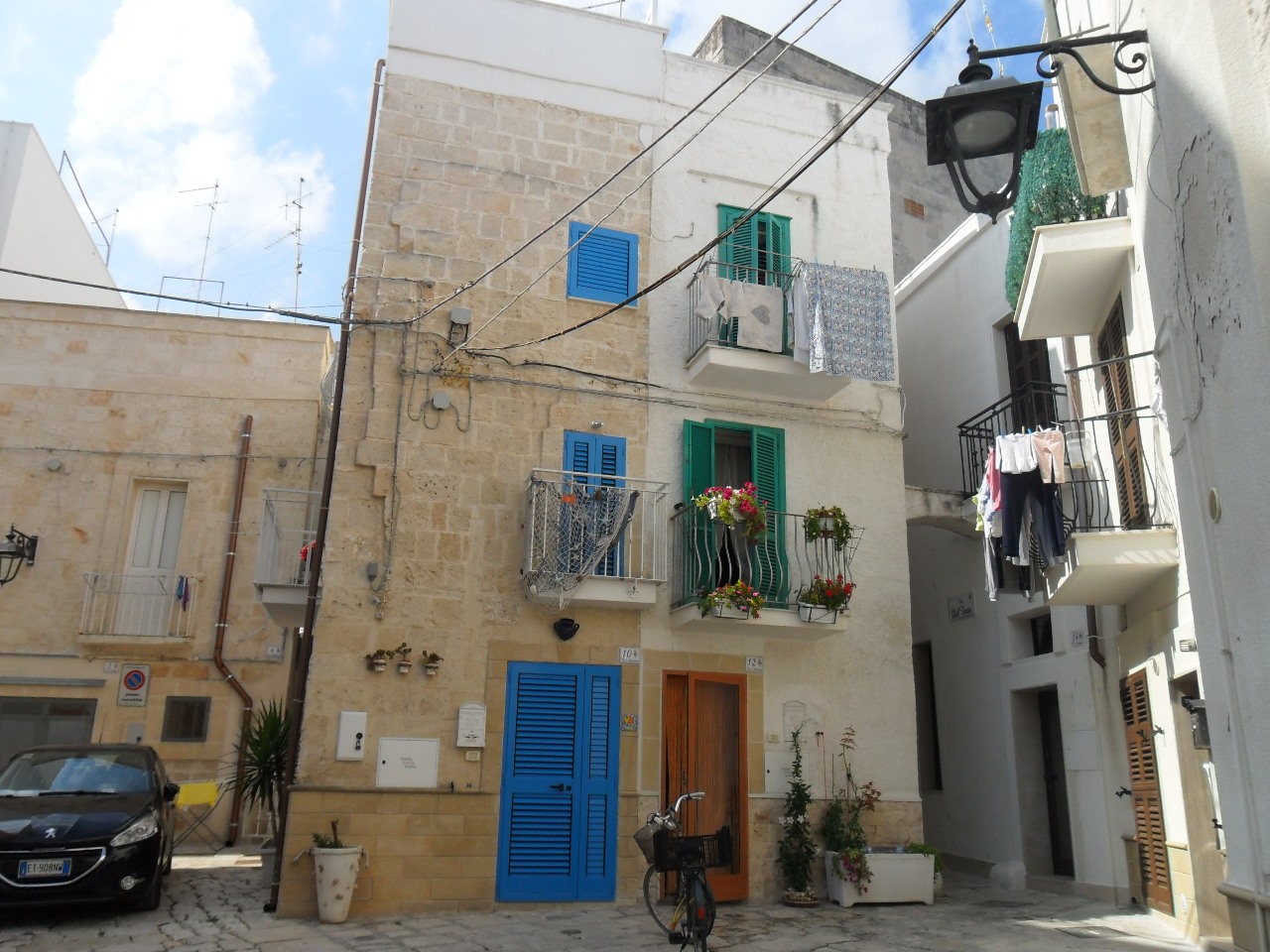 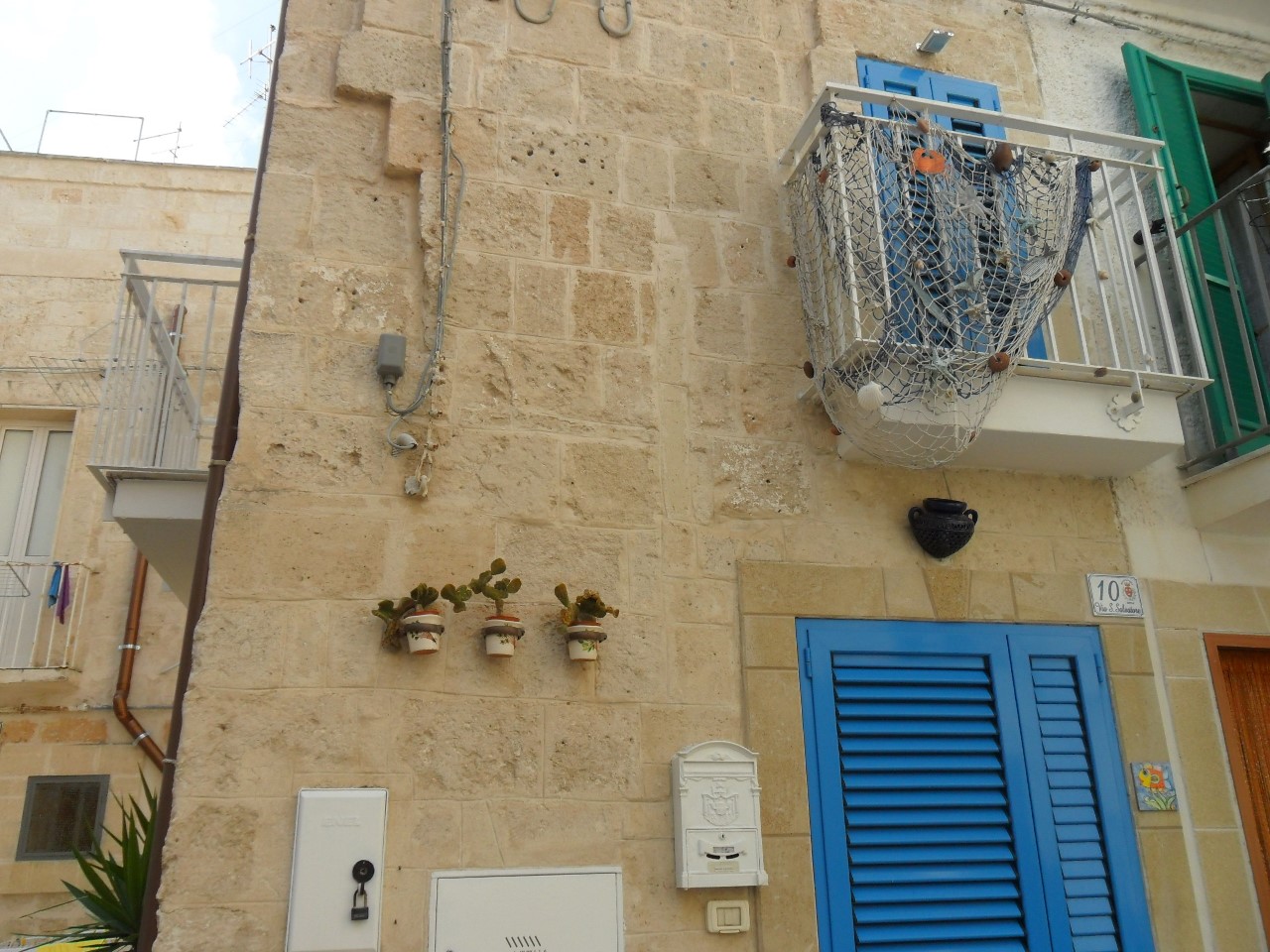 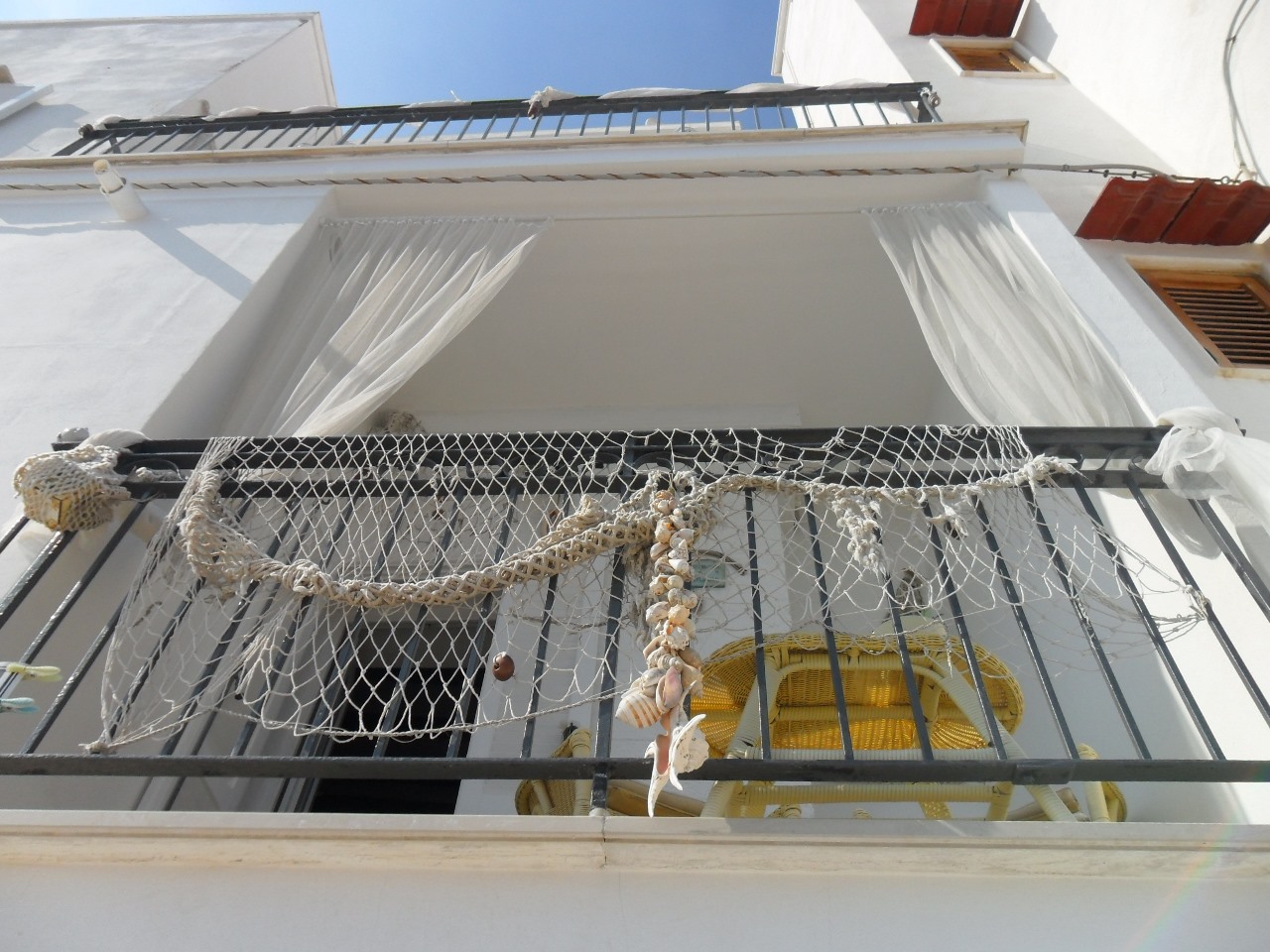 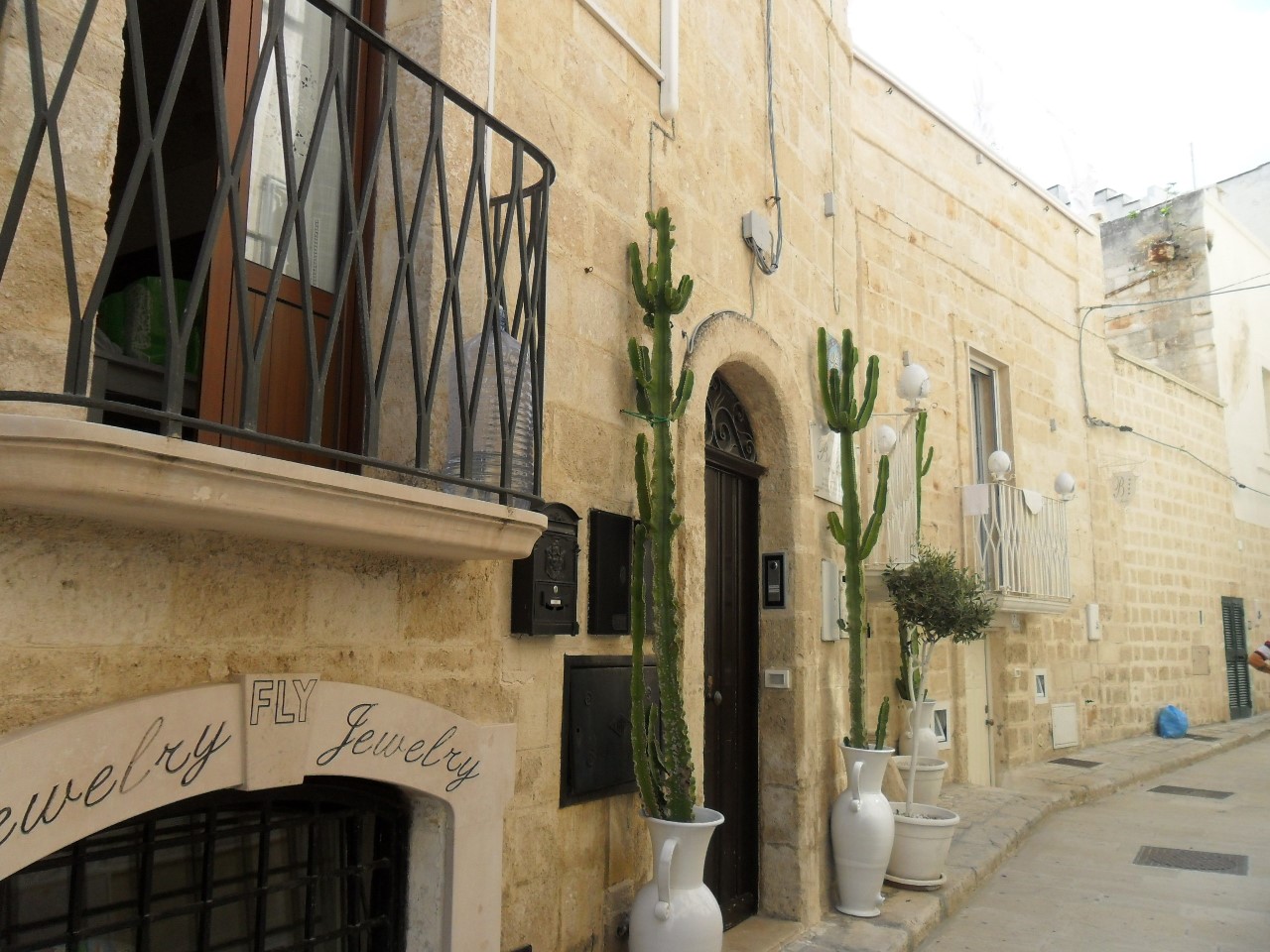 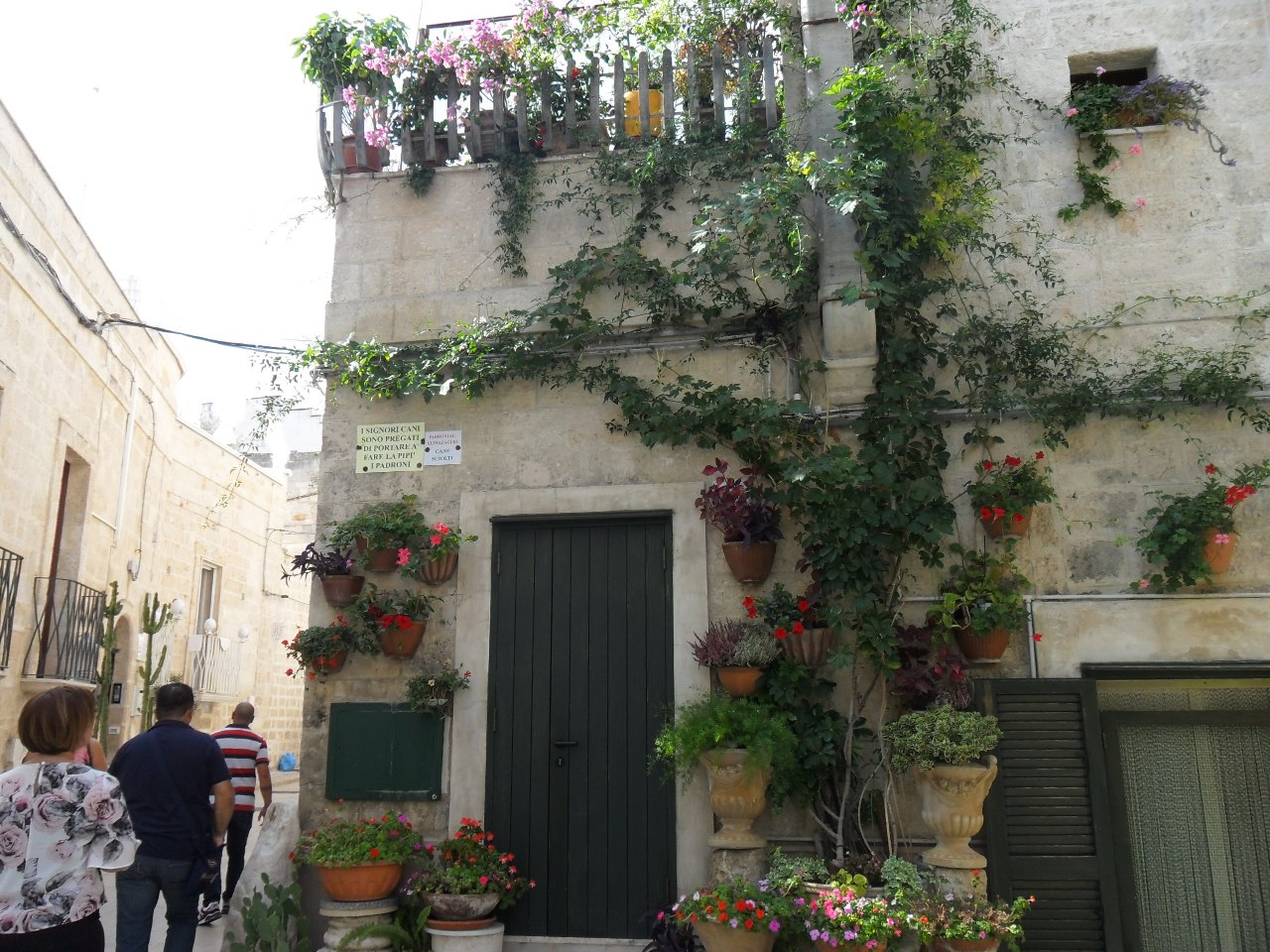 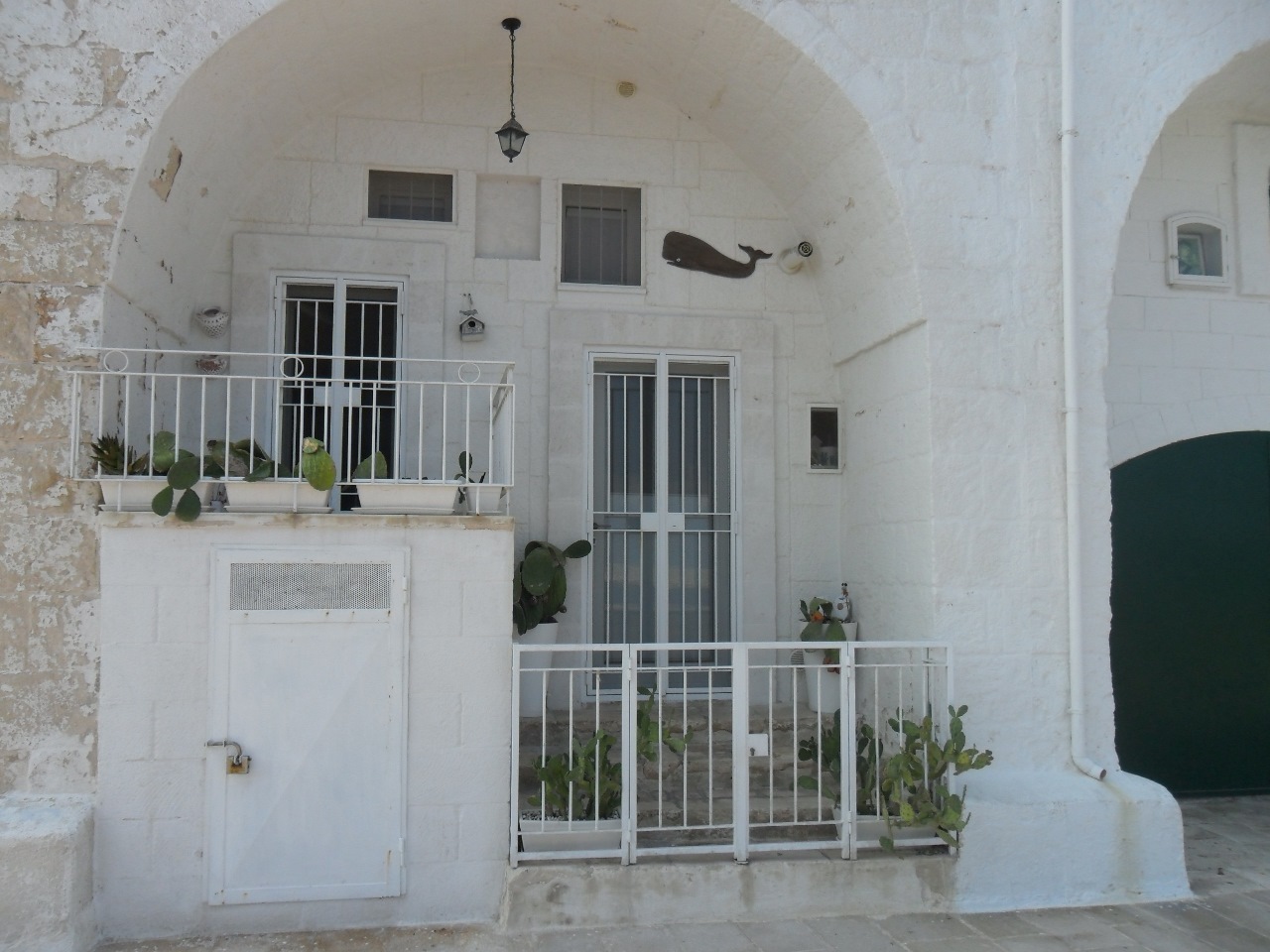 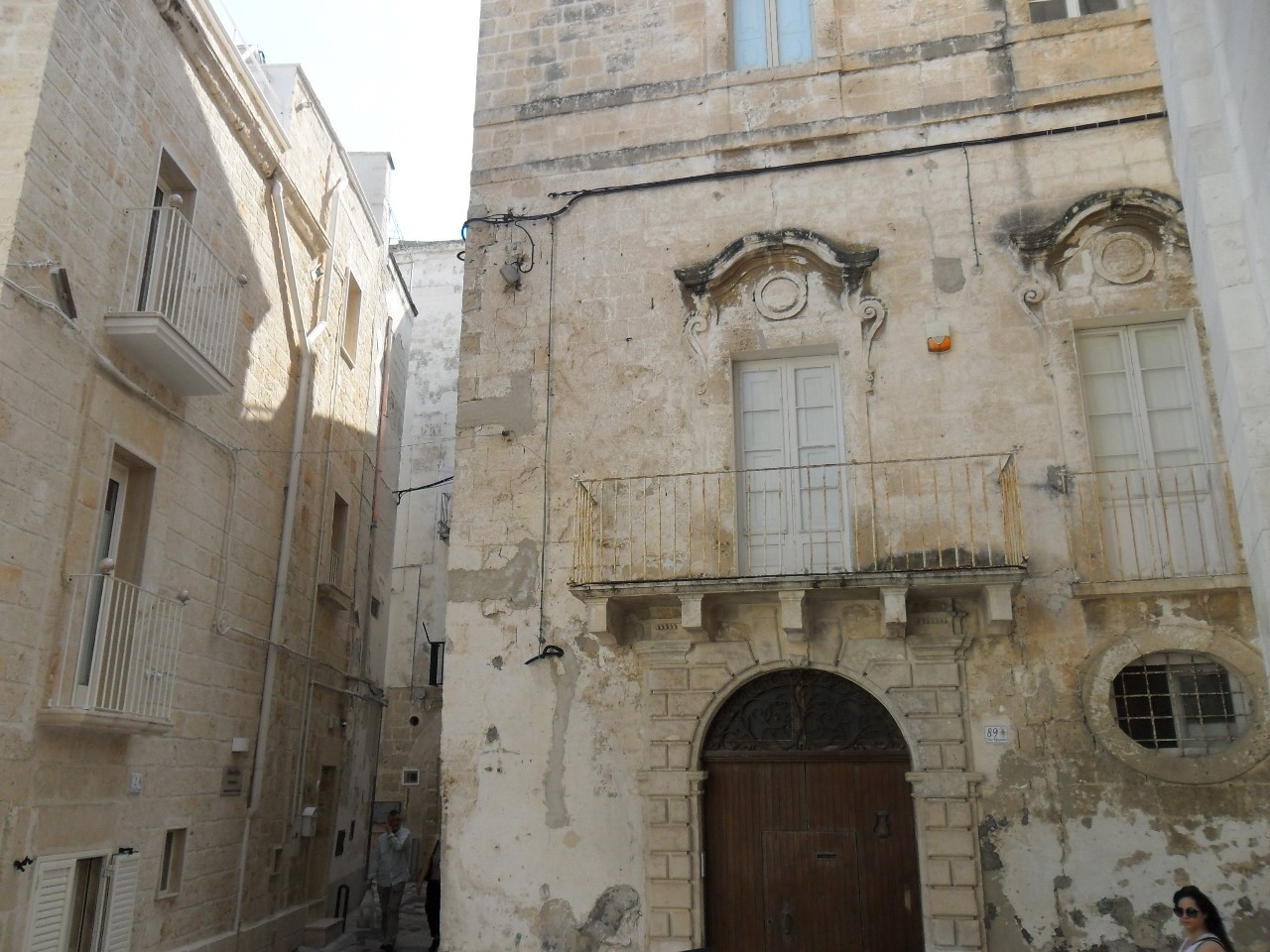 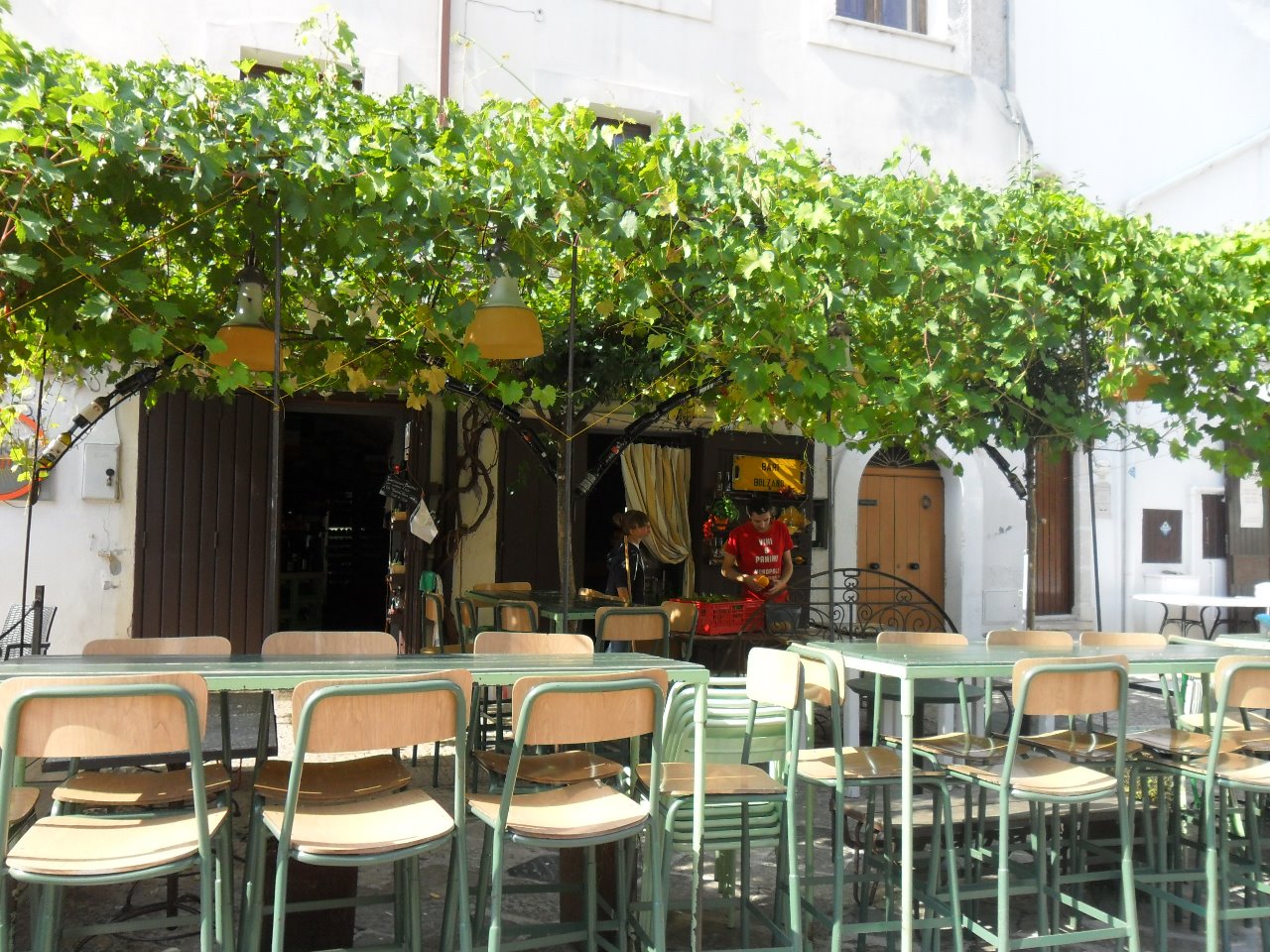 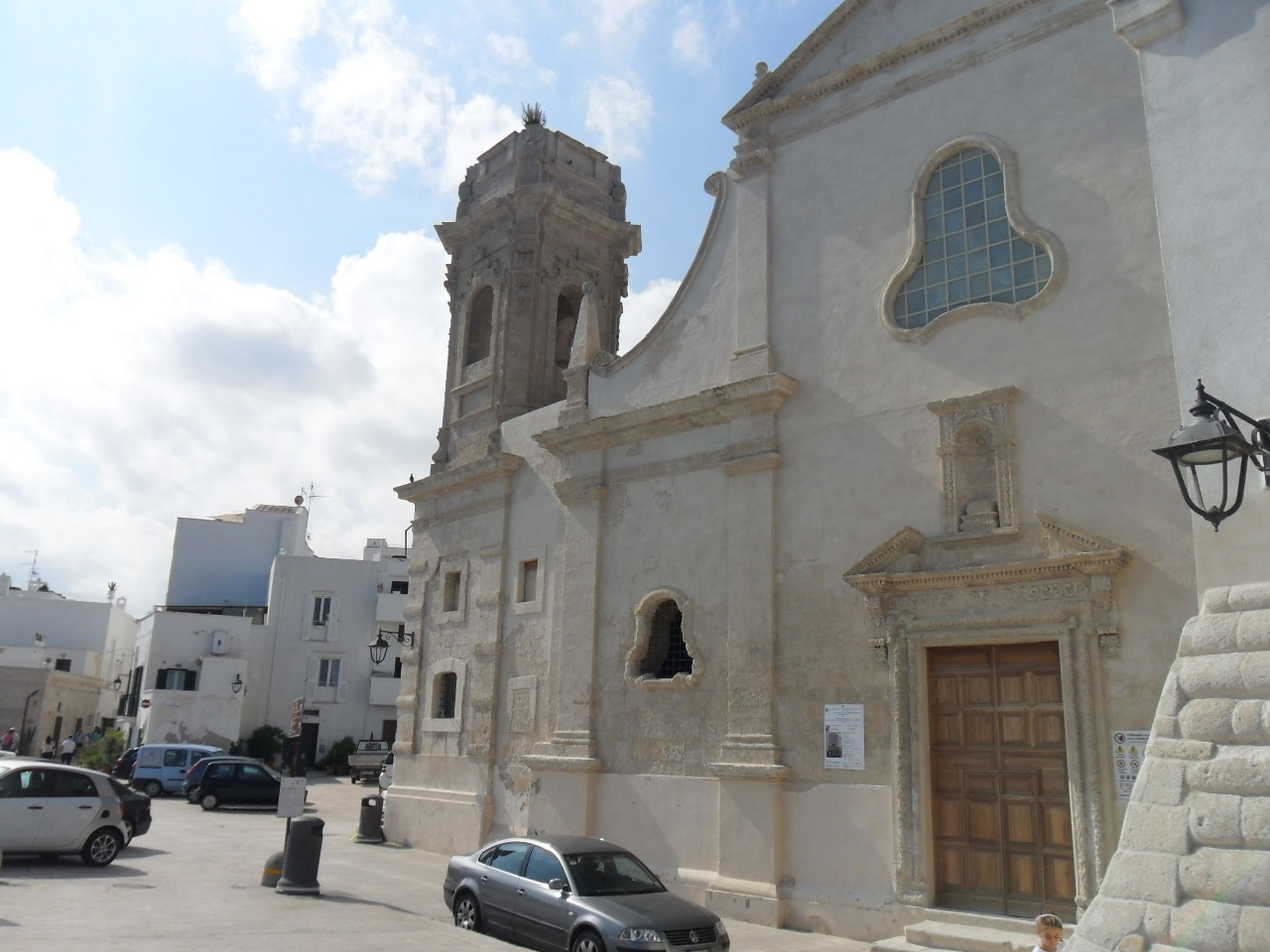 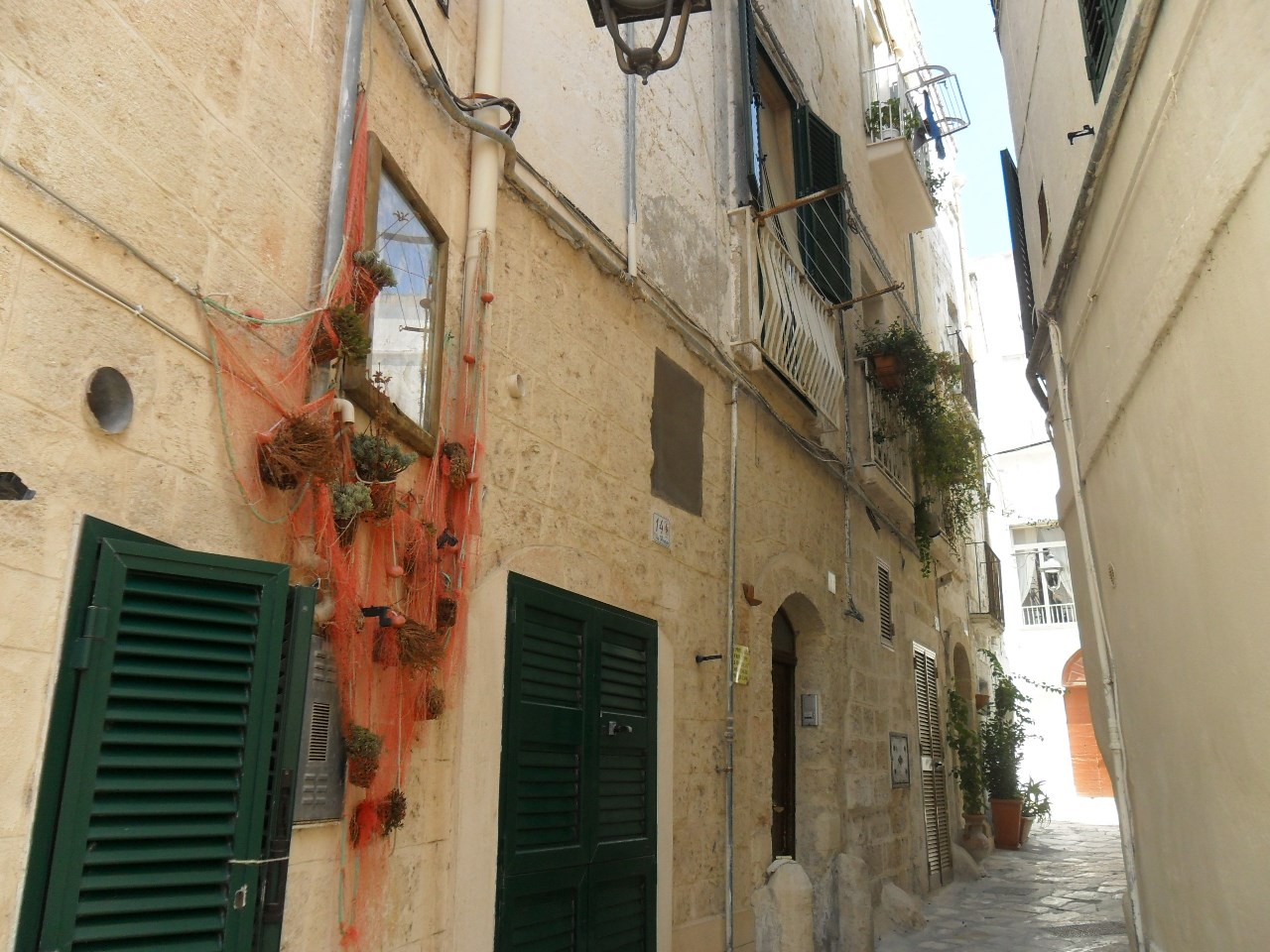 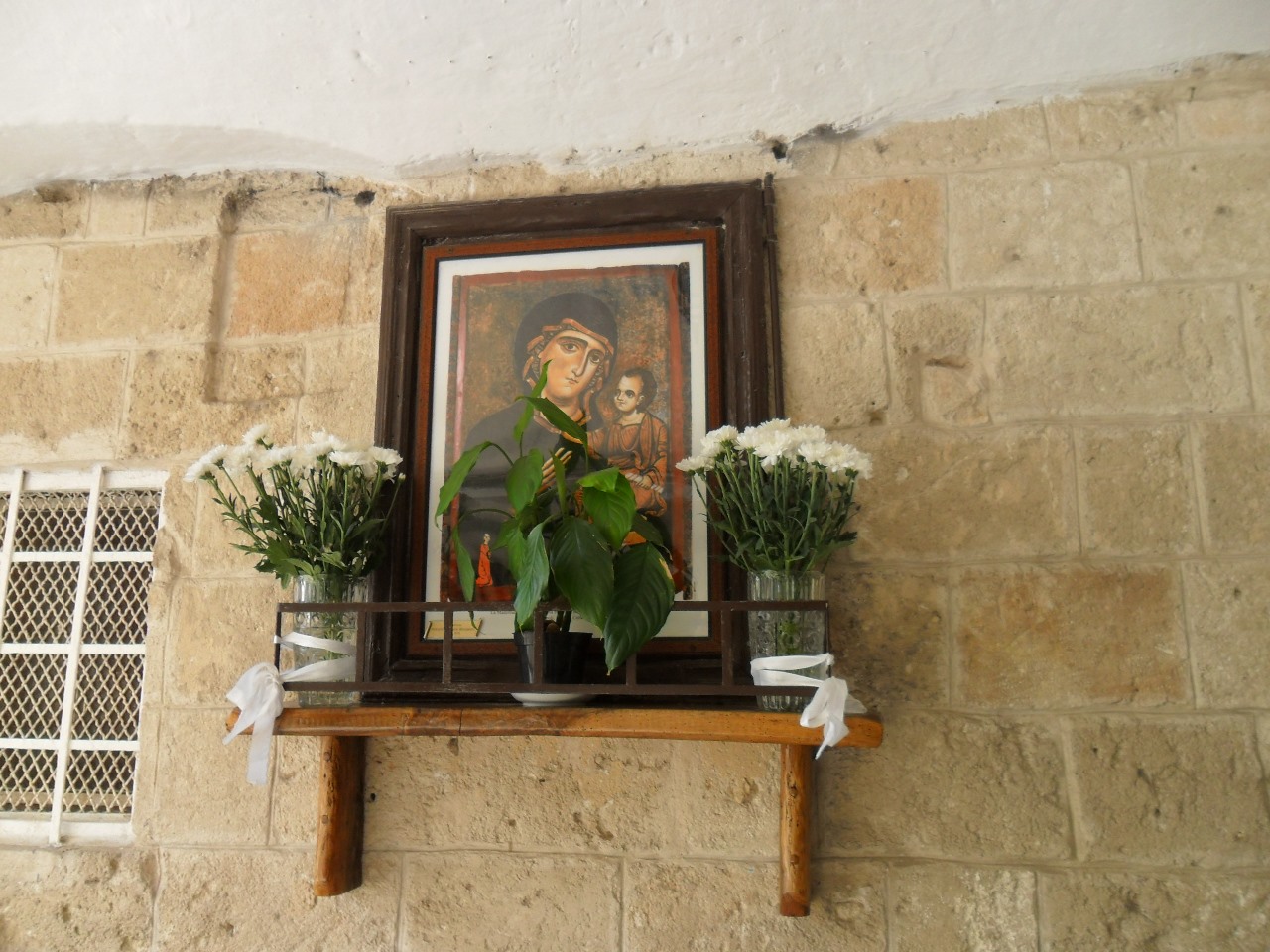 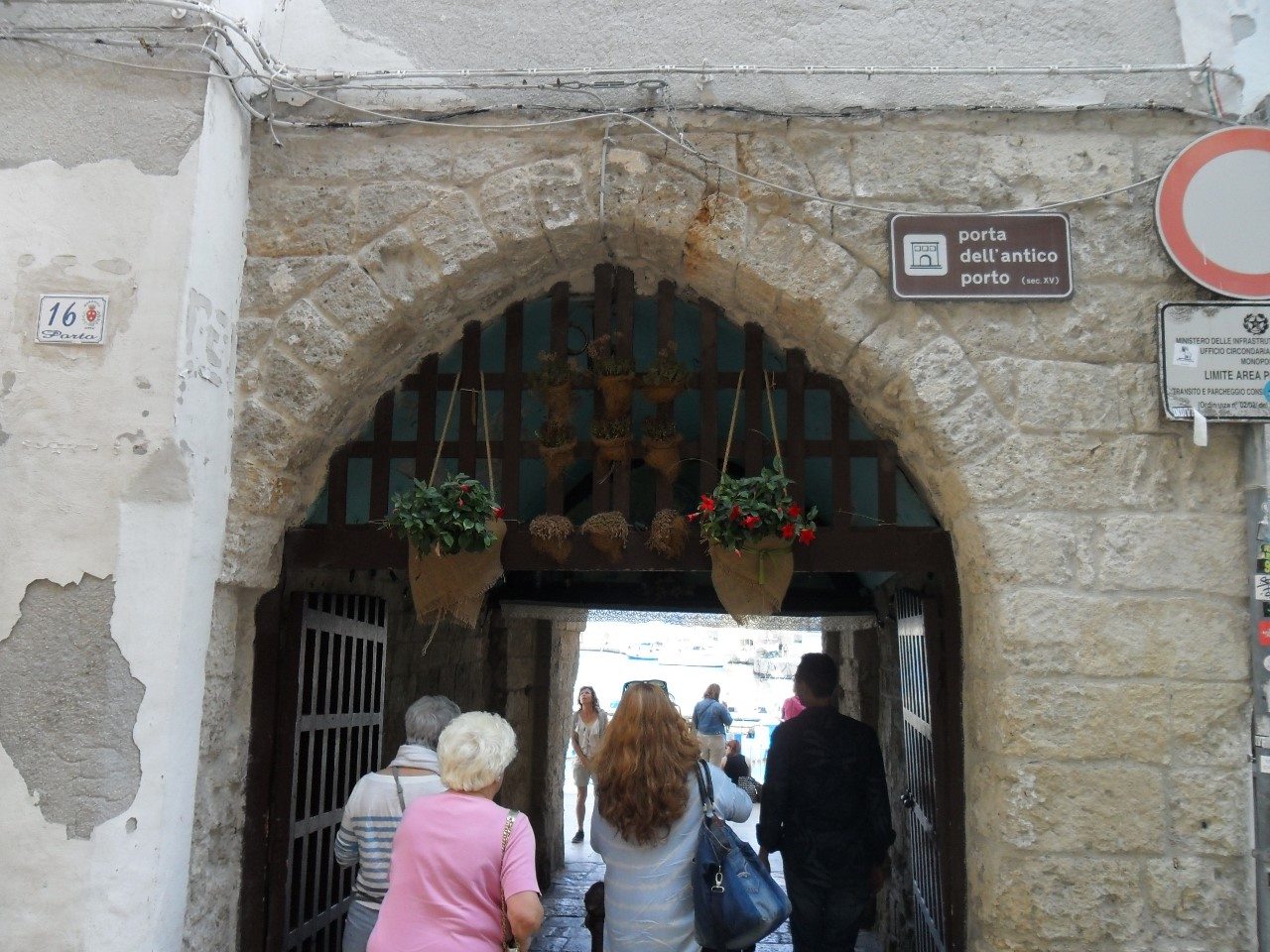 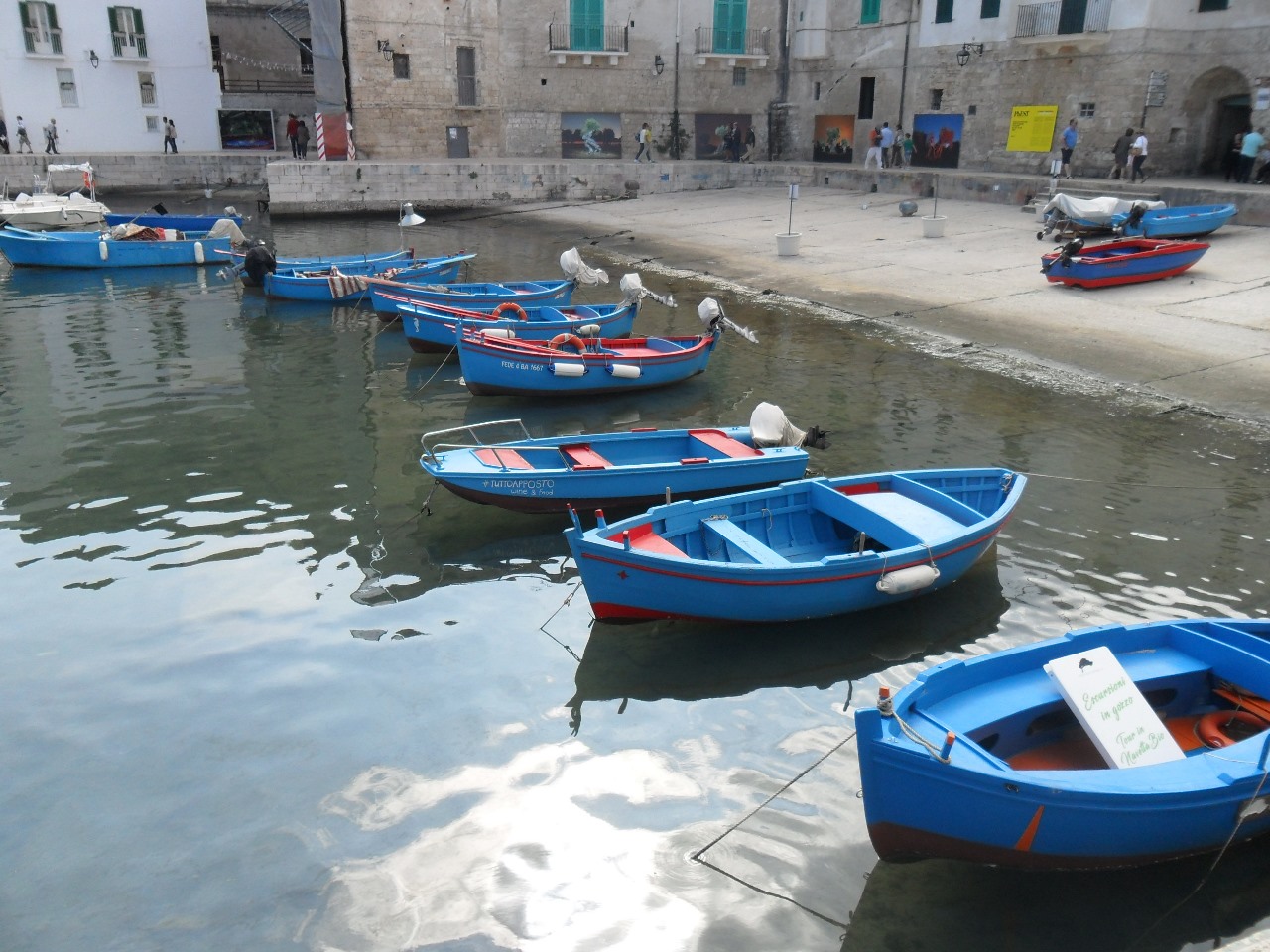 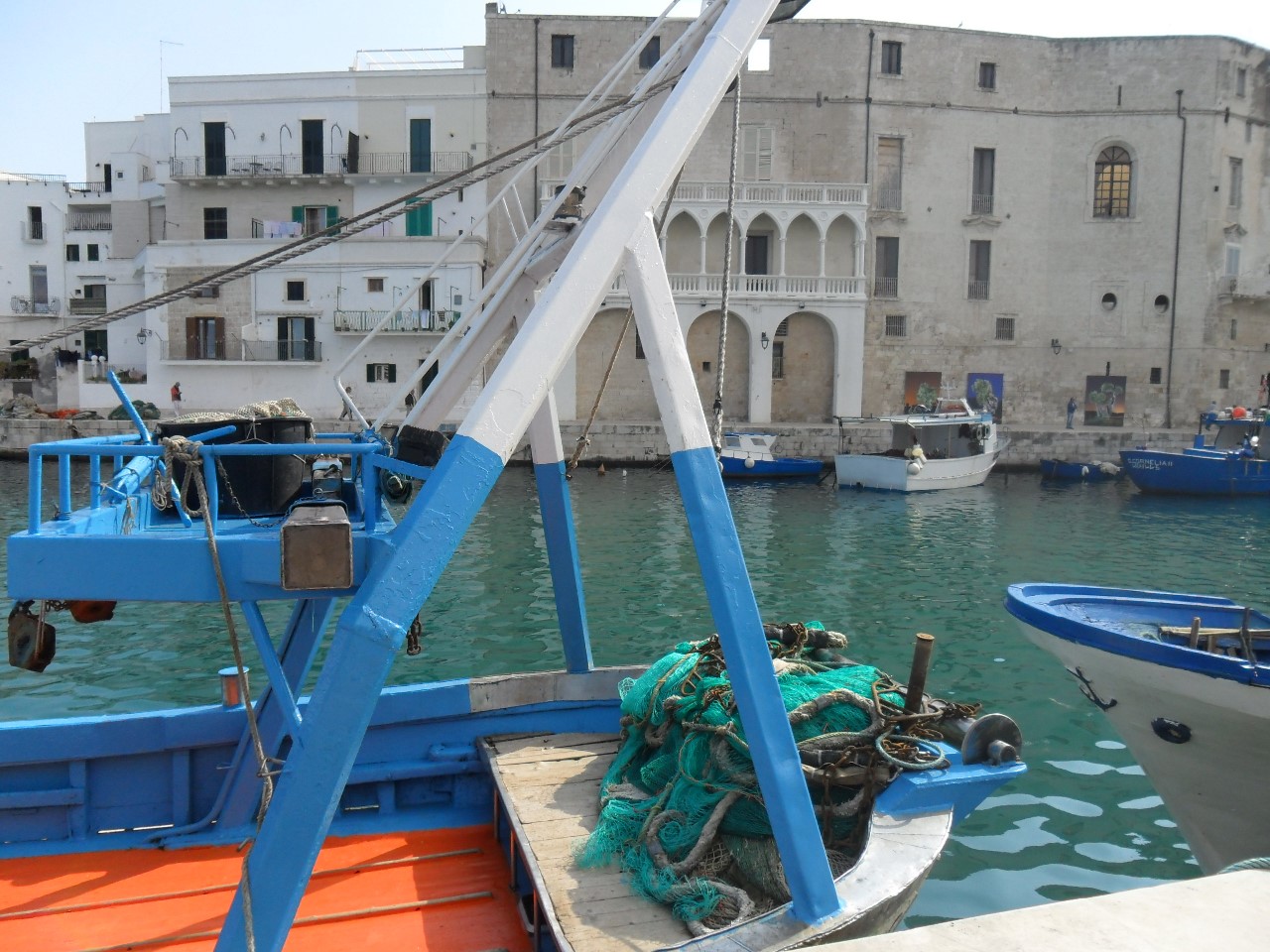 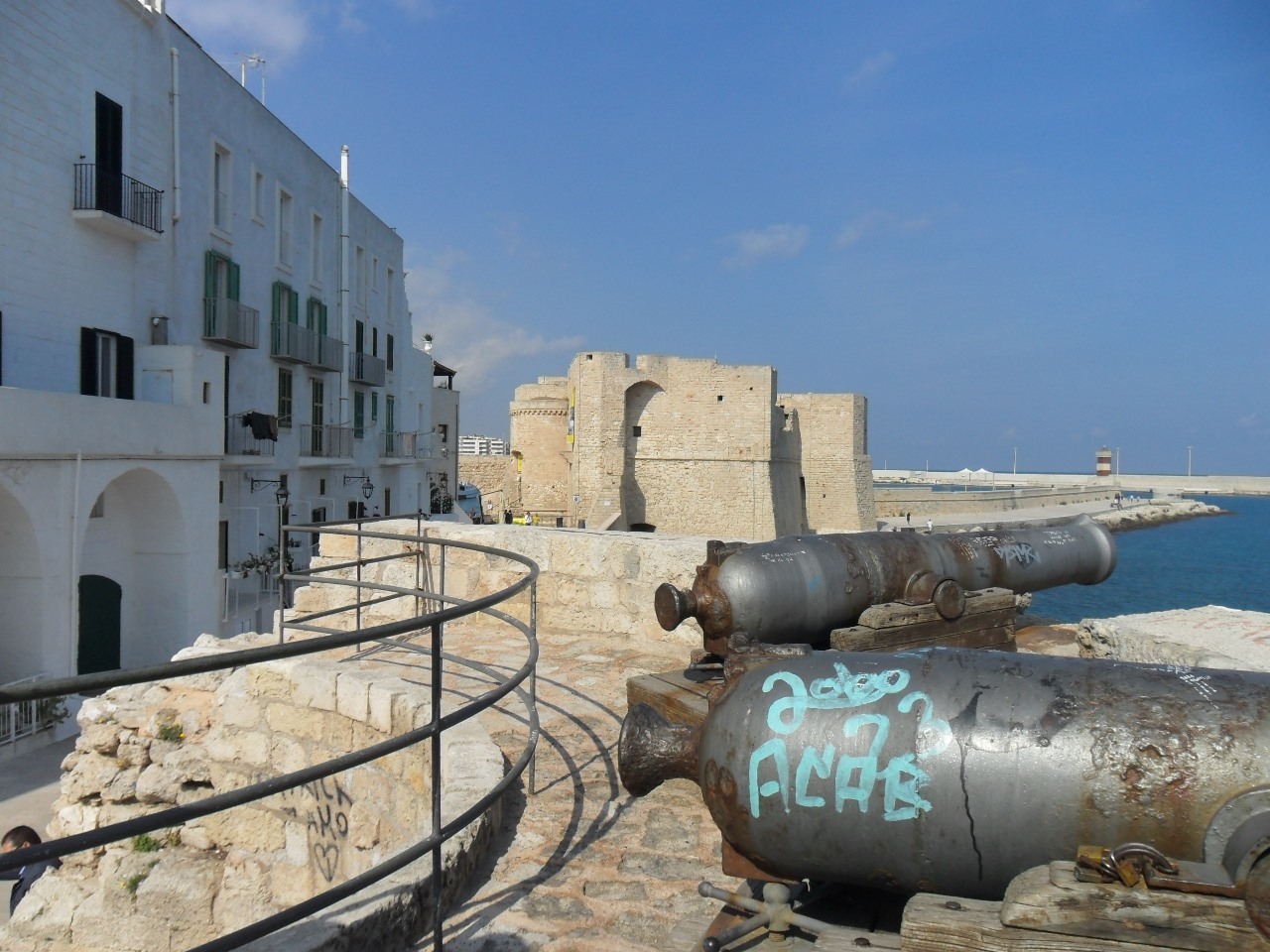 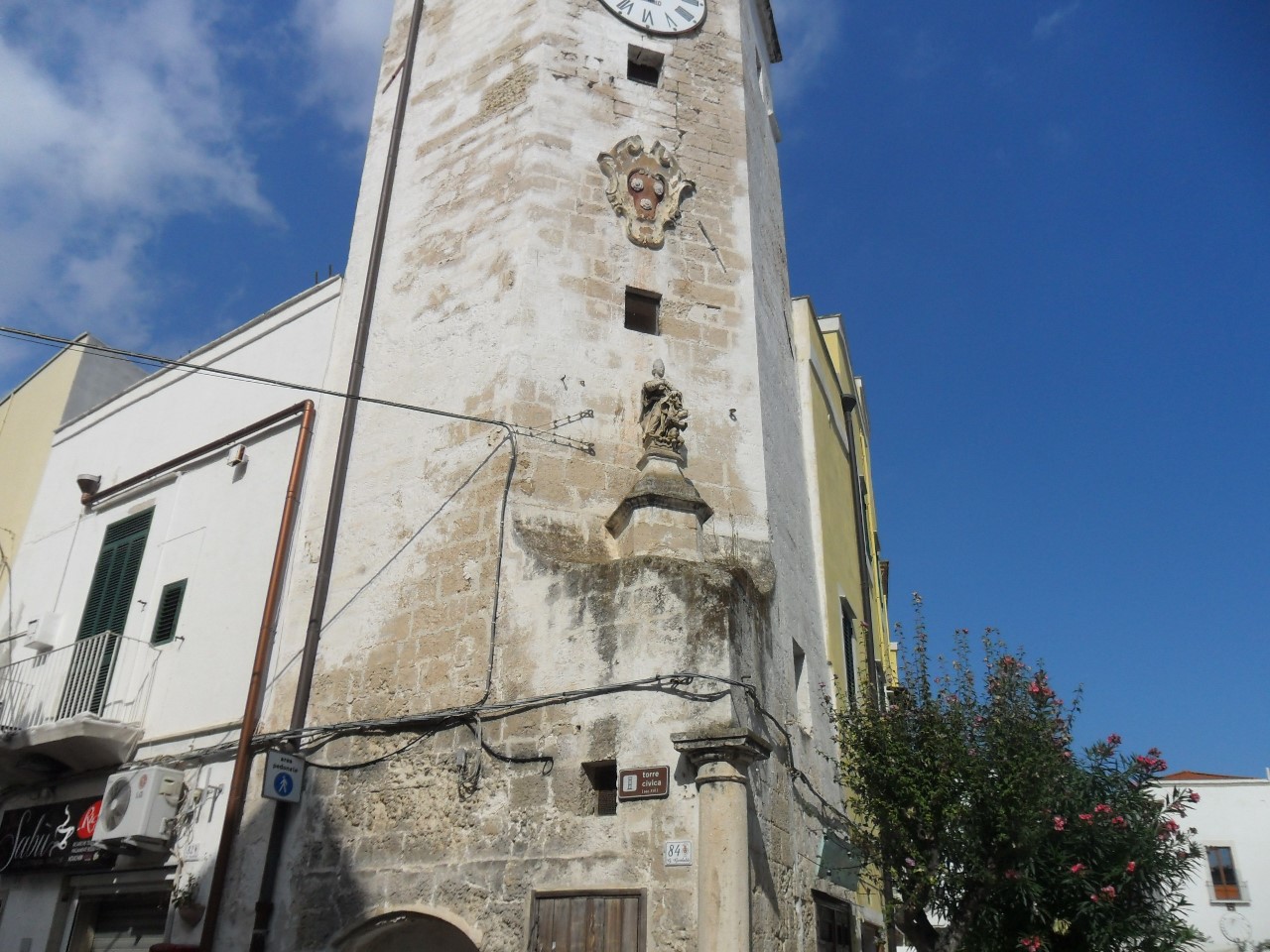 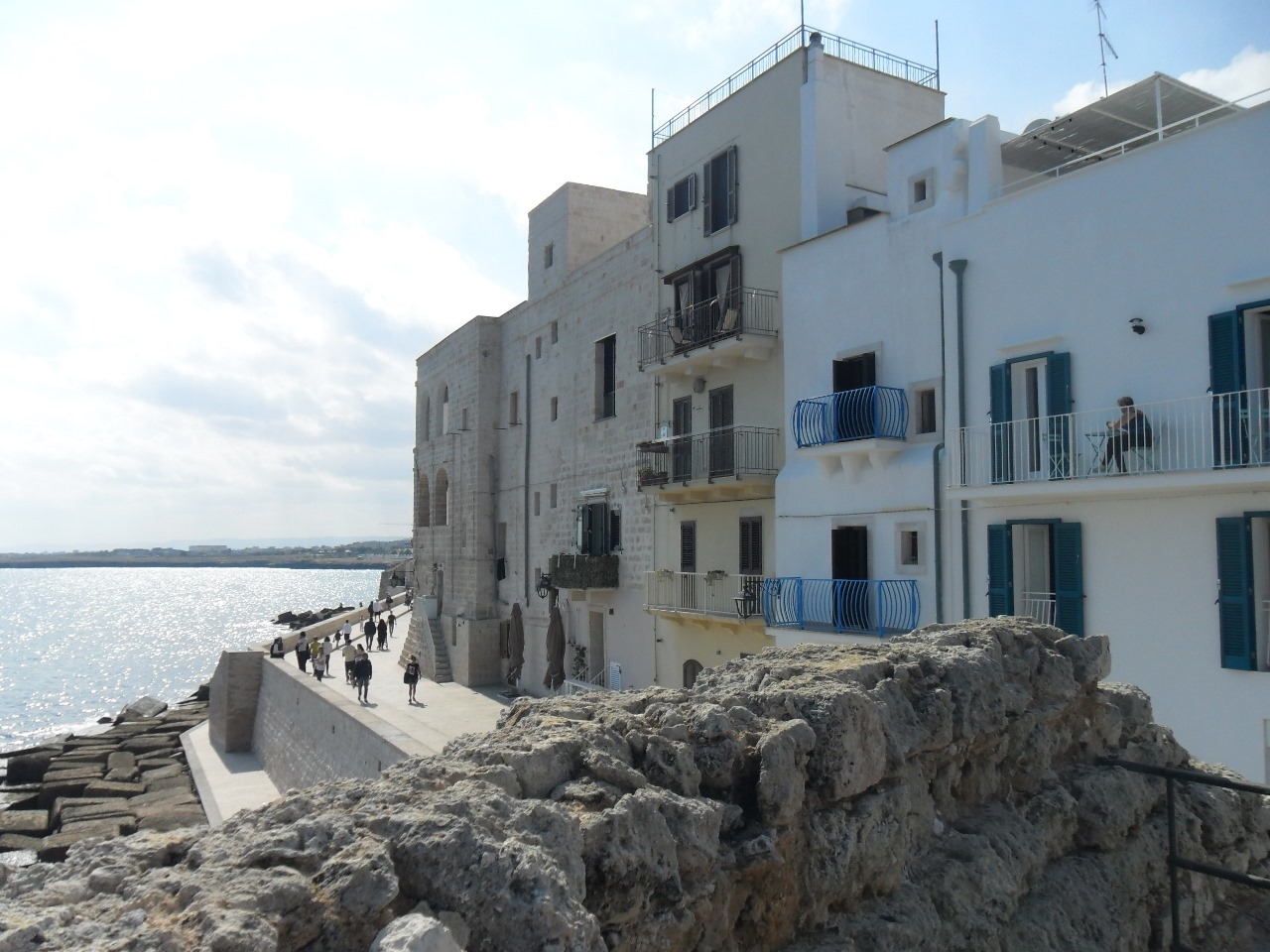 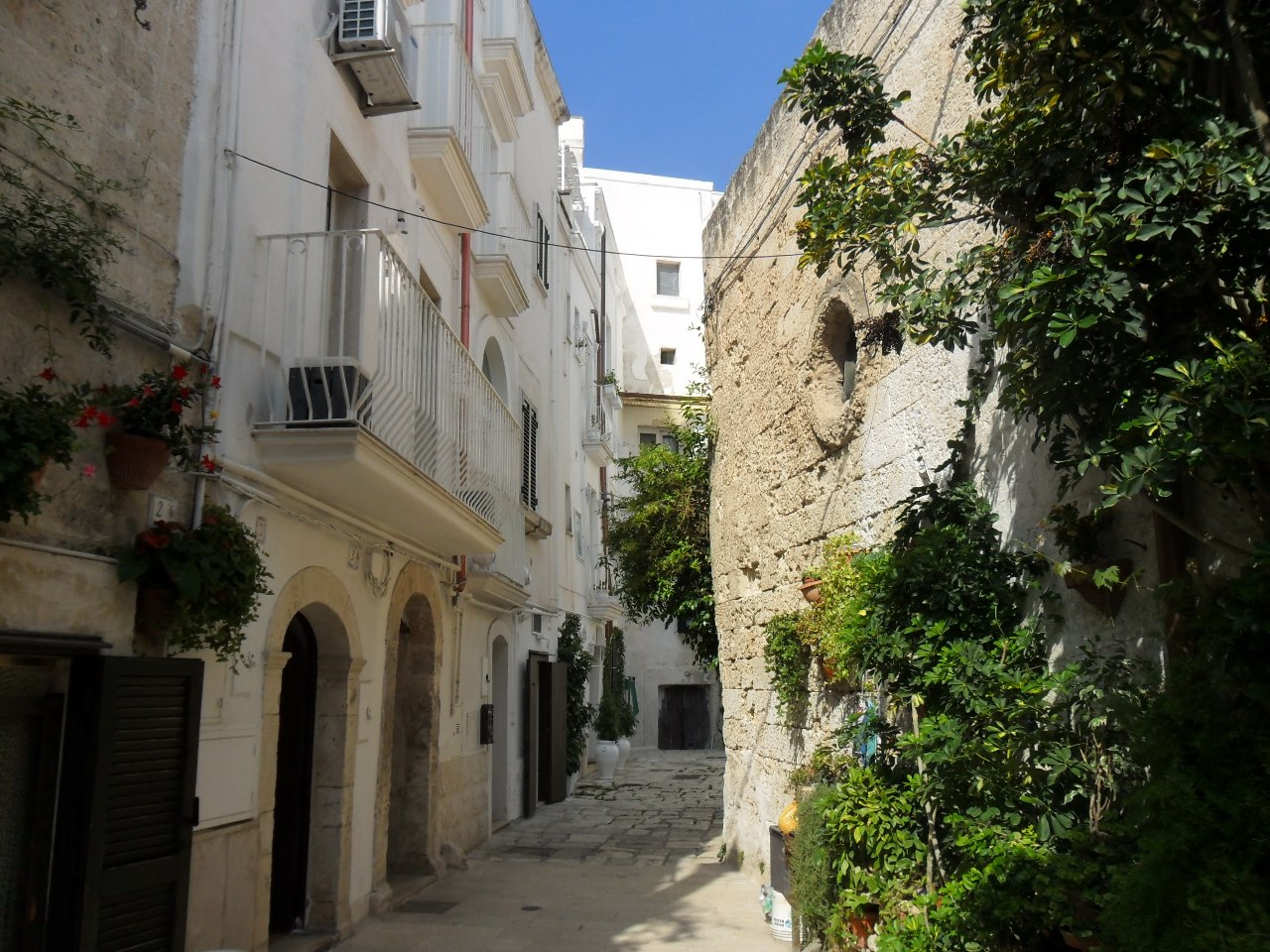 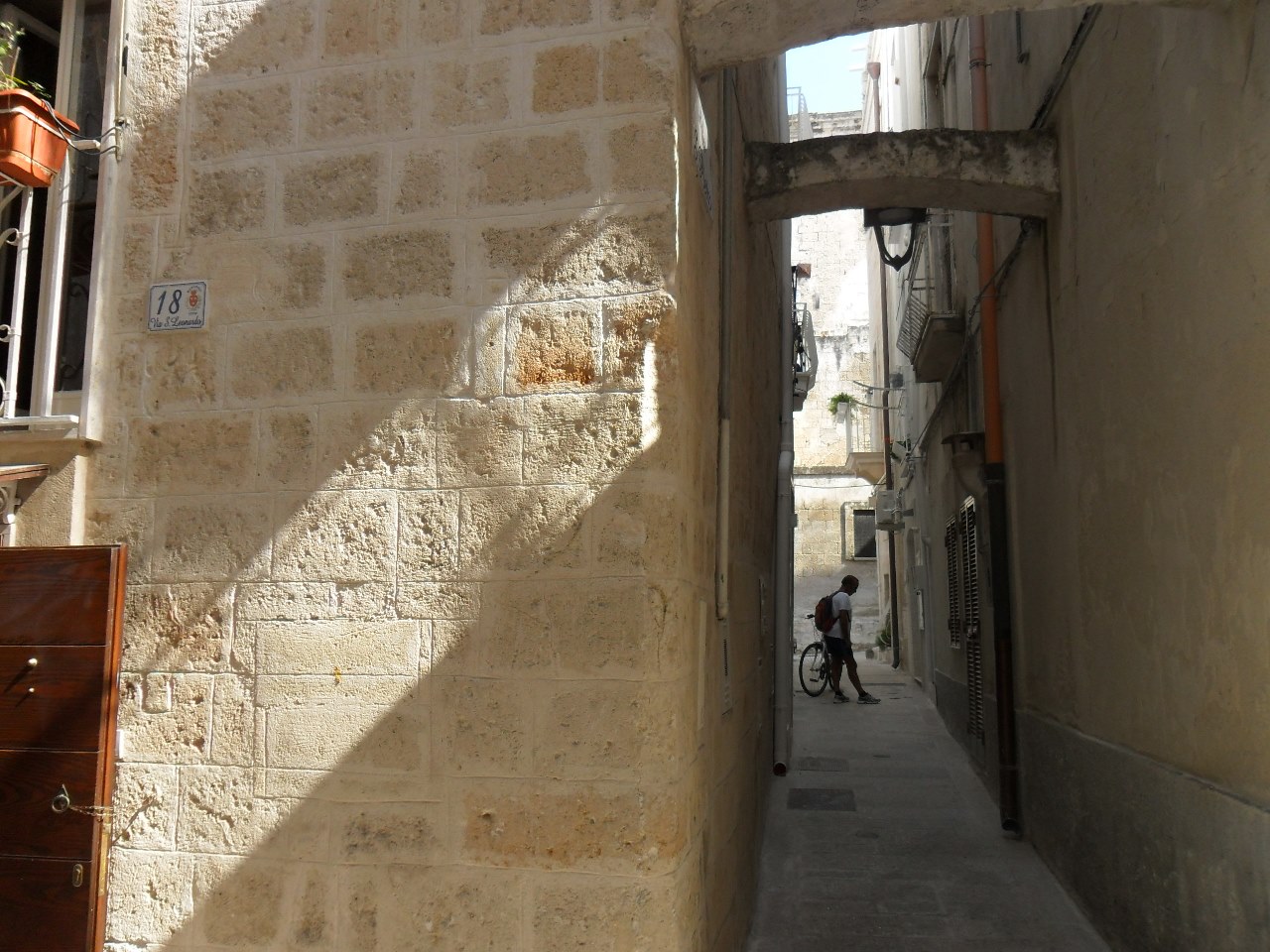 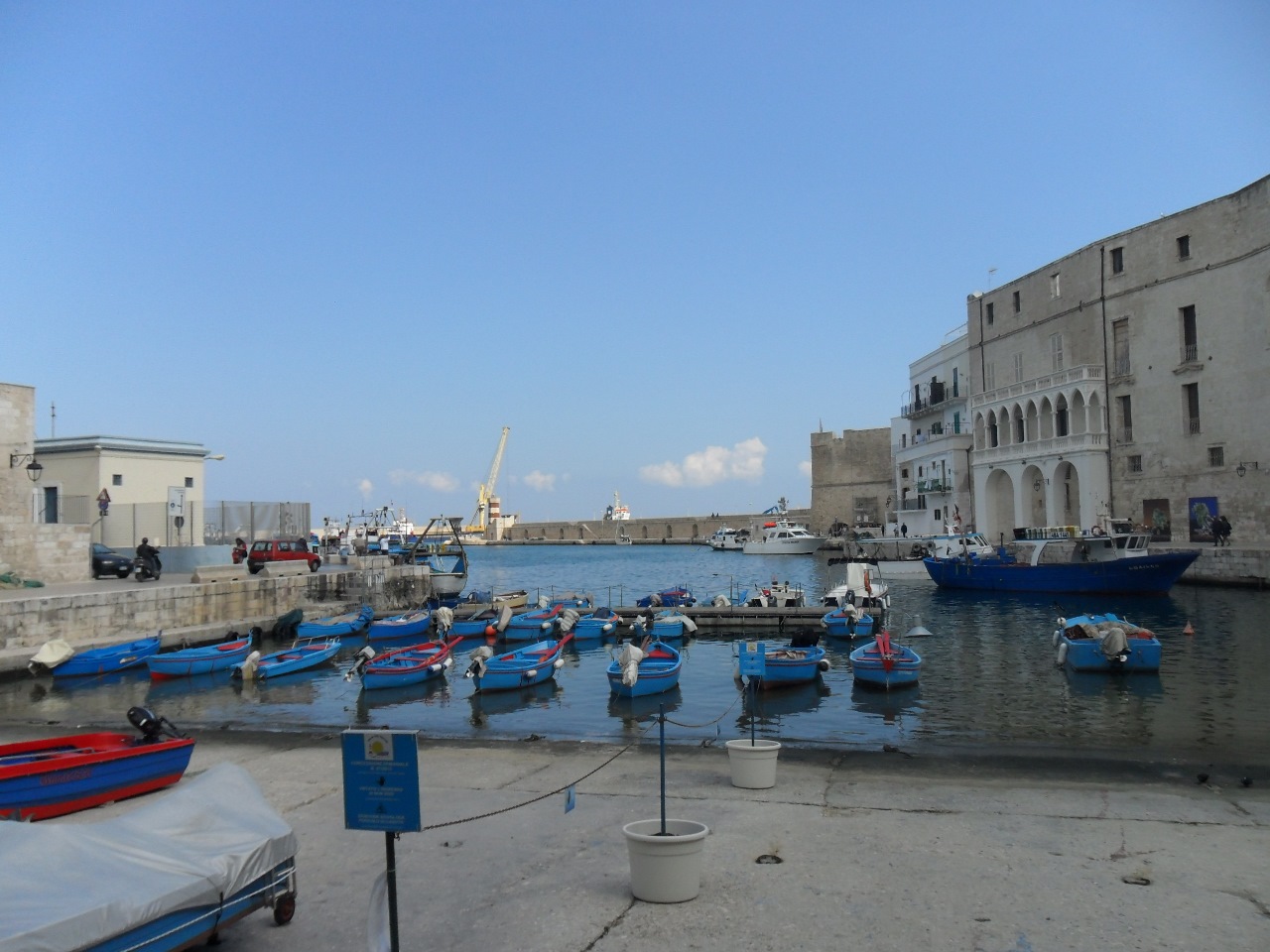 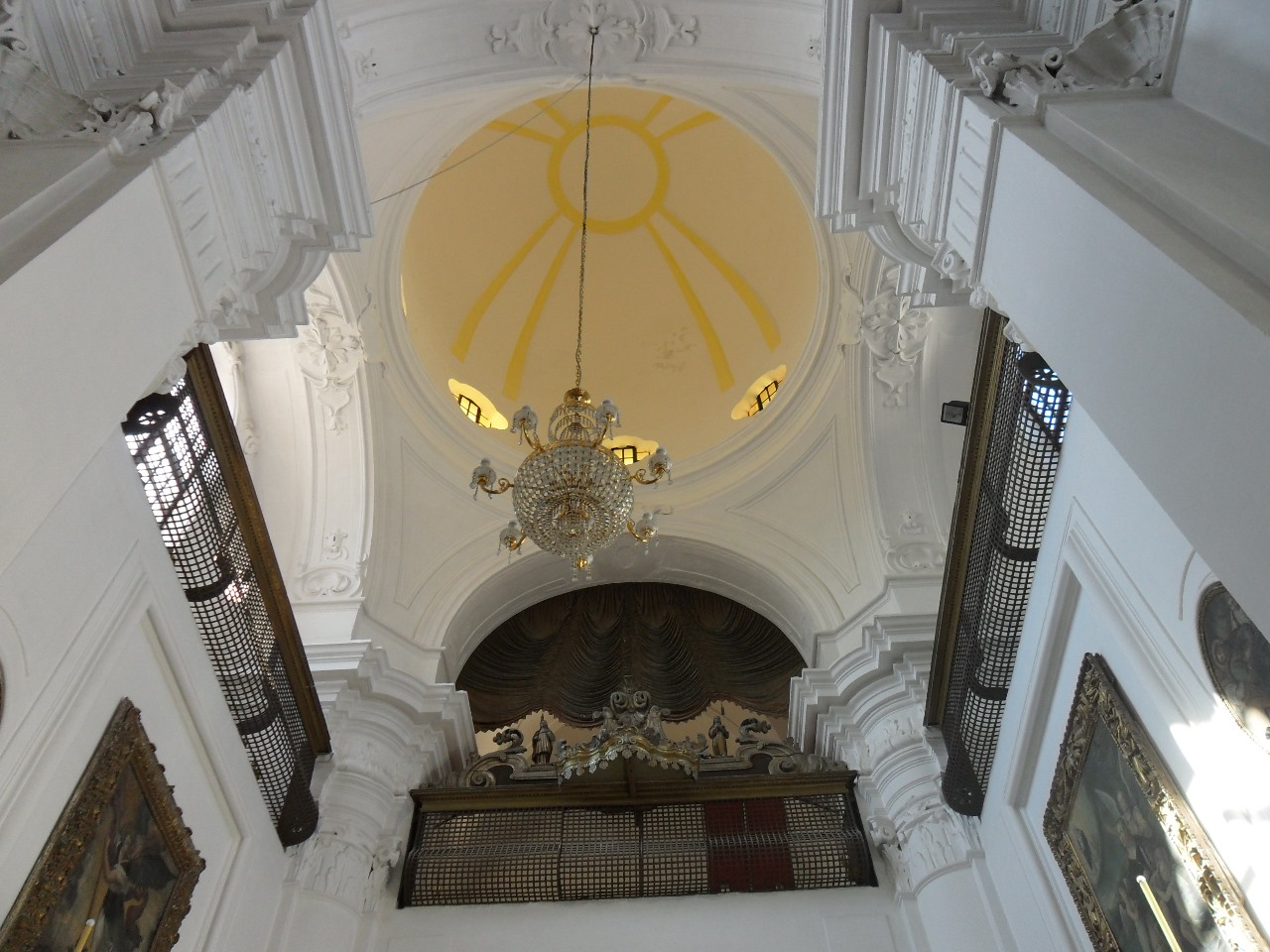 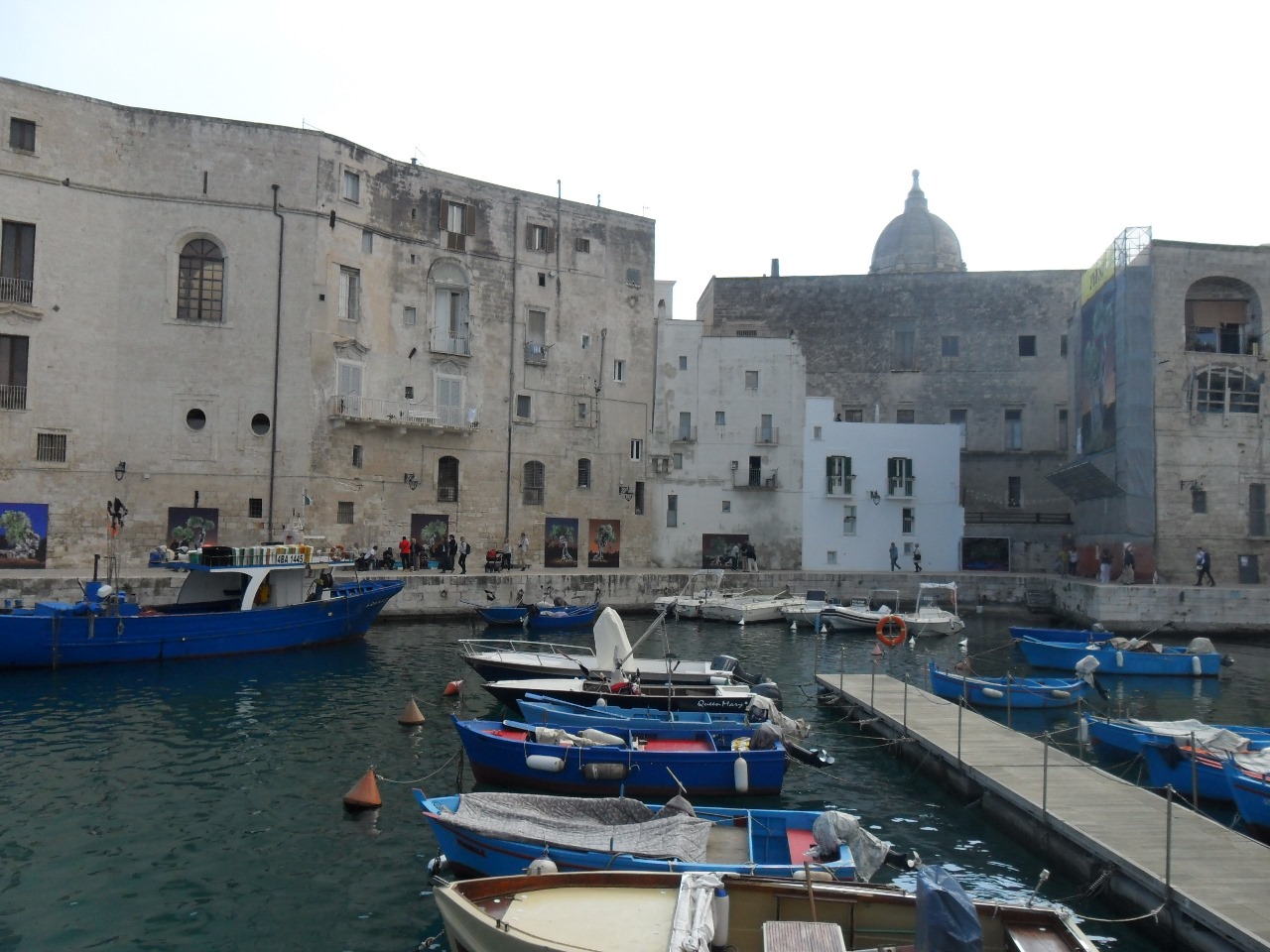 Because of its vicinity to the sea, Monopoly has extremely ancient origins. The first village here dated back to the Bronze Age, which was successively integrated into a Messapian city, complete with defensive walls. The arrival of the Romans brought the development of commerce and the economy, as well as a monumental city gate that we can still admire today, which became an important element of the castle built in the 1500’s.

Like all the cities in the south of Italy, Monopoli was inhabited by a wide range of foreign populations. Some came to rule, some were just passing through, but they all left important traces of their cultures in the city. Monopoli is southernmost port in the territory of Bari, and during the Crusades it was the most important  point of departure for the Holy Land in the south, which allowed the city to develop all through the Middle Ages, enriching the city both economically and culturally.

The continual artistic changes, as well as the incursions of the Turks and the Venetians which partially destroyed the city, had a detrimental impact on preserving the traces of the ancient past, most of which have been lost.

An example of the enormous strength of character of this city can be found in a curious story where the main protagonists are the humble citizens themselves. In 1529, the Marquis del Vasto, on his recent return from Tuscany, decided to attack Monopoli, for no reason. The city was subjected to heavy cannon fire, which is still visible along part of the city walls. Thankfully, three months later, The Angevins forced the Marquis to leave the city. In 1530 the feudal territory became the personal property of Charles V, who decided to sell it to a Marquis from Messina, Sicily. At this point, the population reacted: tired of being a disposable pawn to the whims of their overlords, Monopoli enforced an initiative of self-taxation, and by collecting small amounts from every citizen, was able to raise enough money to buy the city’s independence.

The Angevin Fortress of Monopoli was constructed on peninsula of land directly on the sea. It was not an unusual choice, in fact, previously in the same position there had been a fort from the Aragon period, an ancient Roman tower and the little church of San Nicola in Pinna, which was ensconced to make room for the castle in 1500, becoming the chapel of the fortress.

At the main entrance to castle a round tower was constructed, whereas the tower on the right holds the cables for the drawbridge.

The castle is built on two levels in the shape of a pentagon with towers at every pentagonal point. Today, the first floor is used for exhibitions and conferences, and the weapons room is equipped with the canons still in firing position. Along the external walls there are still the ancient firing portholes, which you can look through to enjoy the breathtaking panorama.

Once the fortress was no longer necessary for defense, it became a castle, and the right portion of the construction was adorned with motifs and decorations. Carved in stone under the ramparts, you can still see the family coat of arms of the Viceroy Don Pedro del Toledo, who built the castle.

The Cathedral of Monopoli

The Cathedral of Monopoli has a fascinating story. The present cathedral was built in 1742, substituting the small Medieval church **volute dal vescovo Romualdo e da Roberto d’Altavilla.***** The previous structure was a small basilica with three naves and a roof built with wooden logs of  Pini d’Alepo (Aleppo Pines), which legend has it were installed in 1117. The logs were originally implemented as a wooden raft (in local dialect:”Madia”)  used to transport a painting of the Madonna with baby Jesus in her arms, now called “Madonna della Madia”. When this little place of worship became too small to accommodate the community, they decided to completely rebuild the church. Work began in 1741 and concluded in 1772. The new cathedral was designed in Baroque style, and the painting of the Madonna is still in a place of honor inside. The Cathedral of Monopoli is undoubtedly one of the most beautiful churches in the region, both for its magnificent exterior and façade, and its sumptuous interior decorated in a triumph of multicolored marble.

The Diocese Museum, founded in 2002, displays numerous replicas of the icon “Madonna della Madia”. It also displays an important collection of Venetian art, with works by Iacopo Palma “il giovane” and Tiziano’s brother, Francesco Vecellio, to name a few.

The little church of Santa Maria degli Amalfitiani is small, intimate place with an intense, evocative impact, especially in the subterranean areas which transport you back into the rustic, archaic world of the past.

The small church was built to honor a vow, made by sailors from Amalfi who survived a terrible storm and made it to safe harbor in Monopoli, where they prayed in thanks for their deliverance in what was then a crypt established by Byzantine monks. Historically, this church is testimony to events linking Monopoli to Amalfi: in fact the ship that brought the sailors from the Campania region was not in Apulian waters by chance. In a period when Venice was jealously enforcing its nautical supremacy, the Venetians had decided to prohibit Amalfi from trading with the orient. Various merchants, in an attempt to offset the negative effects of the embargo, decided to transfer their operations to this area of Puglia. Because of this, Monopoli became home to a small community from Amalfi.

The original structure was simply a crypt, which then became the little church constructed by the Amalfi sailors. A remodeling intervention in 1932 preserved only a part of the original sculptural decorations.

Today, the church of the “Amalfitani” is used to hold intimate ceremonies and every so often, a classical music concert or small art exhibit.

The stretches of lush green of the Valle d’Itria are punctuated by luminous white structures that are testament to an ancient past of mysticism and religion, tended by the humble dedicated souls of the local farmers. The little churches found all around the territory are untouched by modern progress, continuing to pass on the traditions and popular beliefs of days gone by.

The little church of San Michele in Fragesto was built on the arrival of the Benedictine nuns. The interior has three naves with domes “in asse”, which is an Apulian stone-work technique to create domes and arches, an architectural element common to churches of the region. The domes have been incorporated into the structure, but they were originally visible from the exterior as well.

In the Assunta “contrada” (meaning street or urban/rural area), there is a small, simple church that safeguards significant historical treasures. The square floor plan of its linear interior is illuminated by magnificent frescoes depicting the endeavors of the Crusades, an in a niche there is an ancient painting of St. George on a horse.

Inside the cavern of San Leonardo, a church with the same name is hidden within. The underground church, or crypt, is formed by a single irregularly shaped nave, and legend has it that St. Peter himself worshiped here.

While not a church, the small, three acre park “Lama degli Ulivi” merits special mention. The incredible translation of “Lama” in Apulian dialect is: ‘the indentation of a riverbed from a river that no longer exists but that left signs of its passage on the surrounding terrain.” You will find yourself in a passageway of dramatic landscapes graced by secular olive trees, the true custodians of the territory, as well as waterfalls and lakes. The majestic secular olive trees are the true masters of this region, and like the historical monuments here, they reflect the identity and the history of this ancient land. Inside the park  there are two small early Christian churches, “Iacovello” church and the church dedicated to Santa Cecilia, which is full of frescoes and magnificent paintings. This park also promotes a worthy cause: the small donation required to visit the park will make you a part of the project to restore and conserve these two early Medieval churches.

Born in Monopoli on the 11th of November 1984, Luca Leggiero began his football/soccer career playing for the Monopoli team. He later chose to dedicate himself to football for five players, known as “calcietto”, little football. He played for the Virtus Monopoli team, and in 2011 entered the national team. In 2014 he and his team won the European Championship, beating the Russian national team.

Born in Monopoli in 1950, Antonio Muolo was a soldier in the Italian Military. He was awarded the Memorial Civil Medal of Honor for saving the lives of two swimmers in danger in Fiumicino, not hesitating to dive back in to save the third person. Unfortunately, his third dive into the turbulent waters proved fatal. 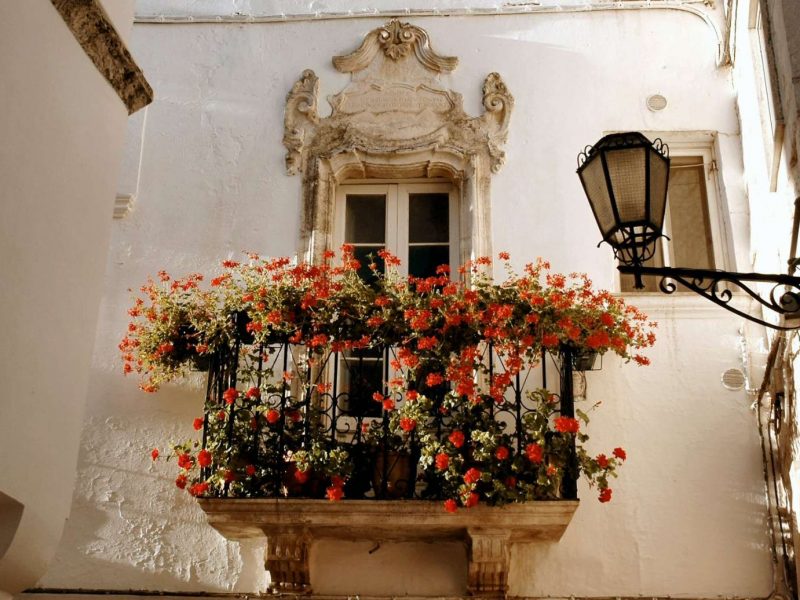 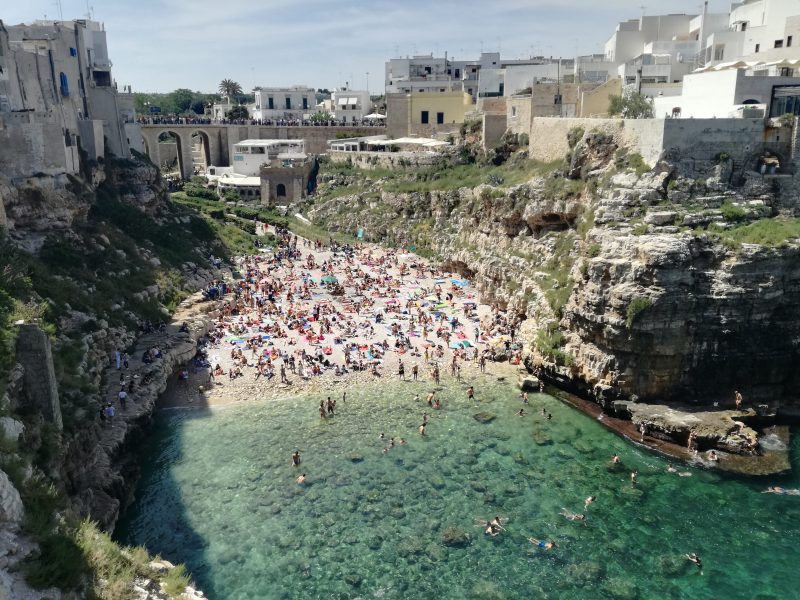